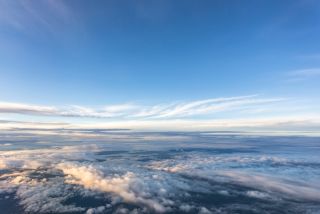 The detected ammonia was most concentrated in the upper layer of the troposphere above India and China, countries that have experienced population and economic booms in recent years. The gas (NH3) is most likely coming from livestock farming and fertilization in those countries, the researchers said.

Plants and crops need ammonia to grow, but too much of it can harm the environment and human health. However, the newly detected ammonia may have an unexpected silver lining: The gas is involved in cloud formation, so it may act as a cooling agent and help compensate for the human-caused greenhouse gas effect, the researchers said. [Infographic: Earth's Atmosphere Top to Bottom]

Now that researchers are aware of the ammonia, they can incorporate it into models assessing and predicting climate change, the researchers added.

The troposphere reaches from 4 miles to 12 miles (7 to 20 kilometers) above sea level and includes up to 80 percent of Earth's atmosphere and weather phenomena.

During an investigation, a team of researchers from Germany, Colorado and Mexico collected satellite data from different regions of the upper troposphere between June 2002 and April 2012, and calculated the three-month averages of ammonia concentrations.

Surprisingly, they found atmospheric ammonia about 7.5 miles to 9.3 miles (12 to 15 km) above sea level in the same area and time period in which Asian summer monsoons happen. In this region — above north India and southeast China — the ammonia had a concentration of 33 pptv (33 ammonia molecules per trillion air molecules), the researchers found.

A thorough search failed to reveal ammonia at these levels during any other season or anywhere else on Earth, the scientists said.

"We have presented the first evidence of ammonia being present in Earth's upper troposphereabove 10 km [6.2 miles]," the researchers wrote in the study.

The discovery indicates that agricultural ammonia produced on Earth's surface can make its way into the troposphere, where it ends up in monsoons, the researchers said.

"Observations show that ammonia is not washed out completely when air ascends in monsoon circulation," the study's lead researcher, Michael Höpfner, the head of the Remote Sensing Using Aircraft and Balloons Group at the Institute of Meteorology and Climate Research at the Karlsruhe Institute of Technology in Germany, said in a statement. "Hence, it enters the upper troposphere from the boundary layer close to the ground, where the gas occurs at relatively high concentrations."

Ammonia can act as an aerosol, or teensy particles suspended in the atmosphere. Aerosols often act as "cloud seeds" around which cloud droplets can form.

Aerosols are the smallest particles known to contribute to cloud formation, and they also appear to influence the properties of existing clouds, the researchers said. For instance, aerosols can alter the size of cloud particles, changing how clouds reflect and absorb sunlight. This can lead to reduced visibility (haze) and redder sunrises and sunsets, according to NASA.

The finding shows that in addition to polluting local ecosystems, agricultural ammonia released in high concentrations can drive the formation of new clouds and alter the properties of existing clouds, the researchers said. [Gallery: Reading the Clouds]

In a strange twist, humans may rely on atmospheric ammonia to mitigate the human-induced effects of climate change. The accumulation of aerosols in the troposphere is thought to have a cooling effect, as clouds reflect the sun's energy. However, clouds can also trap heat released by Earth, which can warm the planet.

In a November study published in the journal Nature Communications, researchers found that ammonia released from guano (seabird poop) in the Arctic may influence cloud formation, leading to a slight cooling effect there.

The new study was published online Nov. 18 in the journal Atmospheric Chemistry and Physics.