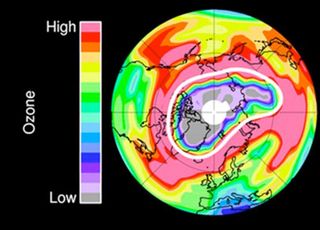 Ozone is necessary and good, but only high in the atmosphere.
(Image: © NASA/JPL-Caltech)

Actually, it's both, depending on what altitude you find it at …

Ninety percent of Earth's ozone is found in the stratosphere (the second layer of the Earth's atmosphere, just above the one in which we dwell, the troposphere). This ozone forms the ozone layer, which shields everything on the planet's surface from the sun's harmful ultraviolet rays.

But when ozone forms at the surface (when pollution from cars reacts with UV rays), it is a pollutant itself, and can damage forests, crops and can irritate human lungs.

Generally ozone stays at one level or the other, but occasionally, stratospheric ozone can be dragged down to the surface when the boundary that marks the shift from the warm air of the stratosphere to the cooler air of the troposphere (called the tropopause) rapidly jumps upward from its normal 8 to 10 kilometer (5 to 6.2 mile) height above the surface, a new study detailed in the Nov. 8 issue of the journal Nature finds. These events, known as ozone intrusions, are rare and don't last very long, which makes them hard to identify.