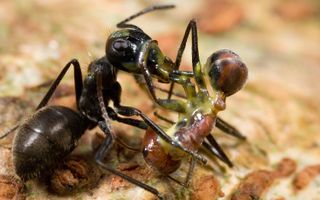 Two ants met a sticky end when one of them ruptured her body to spew a sticky yellow goo.
(Image: © Mark Moffett/Minden Pictures/Newscom)

Treetop-dwelling ants from Southeast Asia have an explosive defensive move: The insects take down their foes by blowing themselves up. If that sounds gut-wrenching to you, just imagine what it feels like to the ant.

Commonly known as "exploding ants," workers in this group respond to threats by deliberately (and fatally) rupturing their body walls, spattering rivals with toxic fluid.

Exploding ants are typically lumped together into a species group called Colobopsis cylindrical, but researchers recently determined that there are at least 15 species of these self-sacrificing insects — including one previously unknown species in Borneo, which they described in a new study. [Ants Scurry on 'Treadmills' for Science]

Many animals engage in chemical warfare, stewing toxic brews in their own bodies to subdue prey or scare off enemies. Venomous creatures — which include snakes, spiders, insects, fish, cephalopods, amphibians, reptiles and even some types of mammals — deliver their toxins with stings, stabs or bites.

But others, such as skunks, venom-squirting scorpions and bombardier beetles, opt to spray their chemicals. In fact, bombardier beetles can emit their heated, poisonous blasts even after they've been swallowed, with unfortunate results for their predator's digestion (and a sticky escape for the beetle).

However, defensively rupturing one's own body — a process called autothysis, from the Greek words for "self" and "sacrifice" — is somewhat more unusual, and is known only in ants and termites, the scientists reported.

The new ant species — Colobopsis explodens — was formerly called "yellow goo," after the brightly colored gunk produced by its exploding worker ants. Their colonies can contain thousands of individuals, inhabiting the leafy canopies of trees that stand as tall as 197 feet (60 meters), and covering an area of at least 26,900 square feet (2,500 square meters), the study authors reported.

The researchers decided to make C. explodens a model species — one that scientists look at to draw conclusions about a larger group; in this case, exploding ants. They noted that C. explodens ants were "particularly prone to self-sacrifice" in the presence of threats — which included intruding researchers.

To blow themselves up, the reddish-brown minor workers — all sterile females — contracted a part of their abdomens called the gaster. They clenched it so tightly that it ruptured, spewing a yellow secretion that was manufactured in the ants' jaw glands and had "a distinctive spice-like odor," according to the study.

And suicidal explosions aren't the only weird adaptation in C. explodens. Major workers — the bigger "soldier" ants that are also sterile females — have enlarged heads with raised shield-like sections that are circular and flattened at the top. The oddly shaped heads create a perfect plug that the ants use to temporarily block openings into their nests, the scientists wrote.

The findings were published online today (April 19) in the journal ZooKeys.