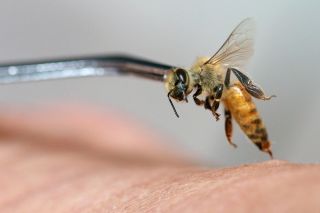 An apitherapy practitioner administers a bee sting to the hand of a patient at Cibubur Bee Center on April 15, 2007 in Jakarta, Indonesia.
(Image: © Dimas Ardian/Getty Images)

An "acupuncture" session using stings from living bees triggered a lethal allergic reaction in a 55-year-old woman at a clinic in Spain.

During the treatment, the woman was deliberately stung by live bees to treat her muscle contractions and stress, according to a recent case report. The blending of bees and acupuncture is a type of "apitherapy" — a term that describes an increasingly popular practice of treating various medical conditions with substances derived from honeybees.

However, there's scant clinical evidence that there are any benefits to these procedures, and in fact, they may be harmful. In this case, bee venom from the stings led to a severe allergic reaction that caused the woman's death, researchers explained in the report. [Spider Bites and Bee Stings: Symptoms and Treatments]

Following a sting administered at a private clinic, the woman began to wheeze and then lost consciousness. She was transported to a local hospital, where she was diagnosed with a massive stroke that resulted in a permanent coma; she died several weeks later from multiple organ failure, the researchers noted in their report, which was recently published in the Journal of Investigational Allergology and Clinical Immunology.

Therapies using bee venom date back thousands of years, and can be traced to ancient civilizations in China, Greece and Egypt, according to a July 2012 study. Today, apitherapy is most commonly practiced in Asia, South America and Eastern Europe, and is used to treat immune-related diseases, some types of cancer, and conditions that affect the musculoskeletal system, such as rheumatism and arthritis, researchers reported in a study published in May 2015 in the journal PLOS ONE.

But bee venom therapies are often linked to adverse reactions, and there is little published research to support their safety and effectiveness, according to the new case report.

For people who are sensitive to bee venom, the venom's compounds can trigger allergic reactions that range from mild to severe. In extreme cases, they cause anaphylaxis, an allergic reaction that can strike within moments after exposure to the allergen, and can be life-threatening. During anaphylaxis, the body floods with chemicals that induce a state of shock; blood pressure drops and the tongue and throat can swell, making it difficult to breathe, according to the Mayo Clinic.

The hormone epinephrine, also known as adrenaline, can ease anaphylaxis symptoms, but the apitherapy clinic in Spain did not have any on hand. And though the unconscious woman was given epinephrine once medical help arrived, the ambulance didn't show up until about 30 minutes after the clinic workers placed the call, according to the case report.

Curiously, this wasn't the woman's first visit to the apitherapy clinic; in fact, she had been visiting the clinic and receiving bee acupuncture every four weeks for the past two years, with no adverse effects reported.

What likely happened is that she developed a sensitivity to honeybee venom over the course of her treatment, "and the last sting was the clinically relevant one that was fatal," Dr. Andrew Murphy, an allergist with the Asthma Allergy and Sinus Center in Downingtown, Pennsylvania, told Live Science in an email. In other words, people can develop a sensitivity to allergens such as bee venom through regular exposure.

"What was even more galling and sad is that this clinic did not even have epinephrine available to treat the patient in case of a reaction," Murphy added.

The study authors suggested that more rigorous measures should be taken by apitherapy clinics to identify people's sensitivity to bee venom — particularly if they have been receiving stings over time — and that people should be informed of the inherent hazards in these largely untested procedures. In fact, those on the receiving end of a bee's stinger should probably consider avoiding bee acupuncture entirely, the physicians added.

"The risks of undergoing apitherapy may exceed the presumed benefits, leading us to conclude that this practice is both unsafe and unadvisable," the researchers wrote.