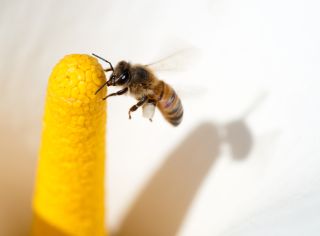 Africanized honeybees, also called killer bees, are hybrids of European and African bee subspecies, according to the Center for Invasive Species Research at the University of California, Riverside.
(Image: © Simon_g | Shutterstock.com)

A municipal worker who got stung by an estimated 1,000 bees while mowing a park lawn on Thursday (July 24) was in stable condition. So how did he survive the buzzing attack?

Turns out, the man's attackers — probably Africanized honeybees, according to the local fire department — are not as deadly as their name may suggest. To be lethal, the bees would likely have had to sting the man several hundred more times, experts say. In addition, the victim seems not to have been allergic to the bees. (The bees also stung two other workers who tried to help the man, according to Wichita Falls' News Channel 6.)

Africanized honeybees, or "killer bees," have been in the United States since about 1990, according to May Berenbaum, head of the department of entomology at the University of Illinois. But despite their dramatic nickname, these insects aren't that deadly. [Sting, Bite & Destroy: Nature's 10 Biggest Pests]

An estimated 40 people in the United States die every year from stings by hymenoptera species. That group of insects includes some 150,000 species of bees (and killer bees), wasps, ants and other bugs, Berenbaum said.

It's hard to pin down specific data on the number of people attacked annually in the United States by Africanized honeybees: As Berenbaum explained, this is partly because not all attacks are reported and partly because, oftentimes, people aren't quite sure what stung them.

Furthermore, it's difficult to pin the blame on a particular species of bee in instances of injuries or deaths caused by insects, because some species don’t leave any telltale evidence. While honeybee stingers stay behind in the body of the victim, many species take their stingers with them after attacking, Berenbaum explained.

Though Africanized honeybees don't always attack, when they do, the results can be devastating. While the victim of Thursday's attack in Wichita Falls, Texas, survived the incident, not all killer bee victims have been as lucky.

Last year in Waco, Texas, about three hours south of Wichita Falls, an estimated 40,000 Africanized honeybees attacked a local farmer who was mowing a neighbor's pasture with tractor, ABC News reported. Larry Goodwin, 62, sustained more than 3,000 stings before collapsing to the ground. He was pronounced dead at the scene.

The number of stings that Goodwin sustained likely caused his unfortunate death, Berenbaum explained. The average person can sustain 10 bee stings per pound of body weight, both Berenbaum and the U.S. Department of Agriculture note. As such, 500 stings might be enough to kill a child, but the 1,000 stings suffered by the man in Wichita Falls did not deliver a lethal dose of venom, given his body weight.

"With honeybees, in particular, the venom isn't really designed to kill. It's designed to educate — basically, to drive away an enemy and make sure the enemy doesn't repeat the threat," Berenbaum told Live Science.

Unfortunately for the victims of killer bee attacks, the insects aren't very good at distinguishing between a true threat and an accidental nudge from a noisy mower. Africanized honeybees are extremely protective of their hive and brood, much more so than European honeybees. And their "home turf" is much larger than that of their calmer cousins. About 100 yards (91 meters), or the length of a four-lane highway, is usually a safe distance from these insects, according to the U.S. Department of Agriculture.

In addition to number of stings, other factors also play roles in determining a person's chances of surviving a killer bee attack. These include the general health of the victims, and their weight and sensitivity to bee venom.

Furthermore, people who are allergic to bee stings can experience a severe physiological reaction after just one sting, Berenbaum said. [8 Strange Signs You're Having an Allergic Reaction]

Allergic to bees or not, anyone who encounters a swarm of these defensive insects should "run away," she said. "And don't zigzag. That serpentine move you see in movies all the time just slows you down."

Berenbaum also advises killer-bee targets not to jump into a pool or other body of water, which you might also have seen in movies. As she explained, the bees will just be waiting for you when you come up for a breath of air.

"If you can get into a building and close the door, that's probably your best hope," she said.