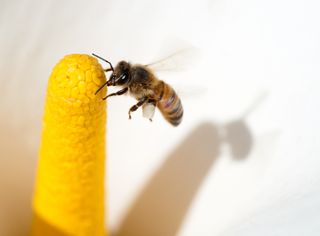 A Texas man died after being attacked by a swarm of Africanized honeybees, sometimes called "killer bees."

Larry Goodwin, 62, was driving a tractor near his home south of Waco when he disturbed a pile of wood that contained a hive of the notoriously aggressive bees; eight people have been killed by the bees since 1990, the Waco Tribune reports.

"You can't believe how bad they are. They make me want to get out of this business," Allen Miller, owner of Bees Be Gone, who later destroyed the hive, told the Tribune. [Image Gallery: Honeybee Scouts Find Food]

"They can get up under your clothes where no other insect can go," Miller said. "In a hive of ordinary European bees, about 10 percent will attack if the hive is threatened, but with African bees, all of them attack you."

Eight to 10 stings per pound of body weight are considered lethal, according to the Texas Agricultural Extension Service. Goodwin's family members told KCENTV.com that there was no part of his body that was not covered in bee stings.

The introduction of Africanized honeybees into the Western Hemisphere was the result of a scientific experiment gone awry, according to a Texas A&M University report.

In 1956, Warwick Kerr, a honeybee geneticist with the University of São Paulo, Brazil, imported African bees (Apis mellifera scutellata) to study. His intention was to selectively introduce traits such as disease resistance and faster reproductive rate into native honeybees.

But a handful of the African bees escaped into the wild, where they interbred with native bees to produce bees with traits primarily derived from their dominant African forbearers (traits of the more docile native bees tended to be recessive and therefore lost), leading to the term "Africanized honey bees." [Sting, Bite & Destroy: Nature's 10 Biggest Pests]

The bees spread rapidly from Brazil and are now found throughout South and Central America. Hives have been reported in the United States in Florida and across the South and Southwest into Southern California.

Though the bees aren't predatory, they become very aggressive when defending their hive, and minor disturbances like a lawn mower or a moving car — even as far away as 100 feet (30 meters) — can trigger an attack.

And Africanized honeybees aren't picky about where they build a hive. Old tires, junk piles, building eaves, cement blocks, upturned flower pots and even empty soda cans have been occupied by the bees, according to the U.S. Department of Agriculture.

In the event of a bee attack, victims are advised to run as fast as they can toward an enclosed area like a car or building; even though some bees will follow, most will be shut out.

Protect your face and head as much as possible from stings by covering your head with a shirt or jacket. And do not jump into water (such as a swimming pool) to escape the bees — they will wait at the surface for their victim to come up for air, according to Texas A&M University.

Stings from Africanized honeybees aren't more venomous than stings from native honeybees, but victims tend to be stung dozens or hundreds of times.

Goodwin, who was reportedly stung more than 1,000 times, was pronounced dead at the scene. A woman and her daughter who tried to help were also hospitalized with dozens of stings, KCENTV.com reported; firefighters who responded to a 911 call were also attacked.

Researchers have noticed that Africanized honeybees seem to be isolated in their current range by temperature and rainfall, according to the USDA.

While attacks by the bees remain very rare, Miller told KCENTV.com that he's seen at least five cases of Africanized hives in the past month, more than he usually sees all year.

As loathed as they are, the Africanized bees might have one redeeming quality: They could hold the key to solving the problem of bee colony collapse disorder, a deadly syndrome that's wiping out native bee populations throughout North America and Europe.