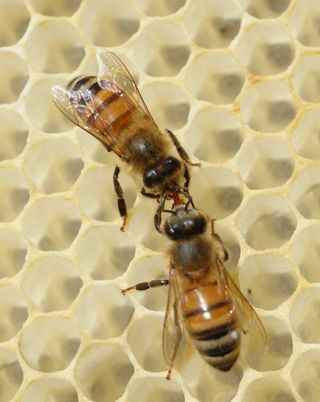 Honey contains chemicals that could help bees ward off parasites and protect them from pesticide damage, new research suggests.

The findings, published today (April 29) in the journal Proceedings of the National Academy of Sciences, suggest that the immune-boosting chemicals in honey could be a solution to colony-collapse disorder, which has decimated bee populations worldwide.

"The natural honey has components in it that help trigger defenses in the bees," said Jay Evans, a bee pathologist at the U.S. Department of Agriculture's Agricultural Research Service in Maryland who was not involved in the study.

Honeybees have been disappearing mysteriously, in a trend known as colony-collapse disorder. Though no one knows exactly what causes the dramatic die-off, scientists think a range of factors, including parasites and pesticides, may be culprits.

Beekeepers often feed bees to get them safely through the winter. Honey may be ideal, but corn syrup is cheaper, so most beekeepers feed bees artificial sweeteners, Evans said. [On the Hunt: Honeybee Scouts Find Food]

To see whether honey provided any benefit to the bees, May Berenbaum, a researcher at the University of Illinois at Urbana-Champaign, and her colleagues identified several chemicals in honey that could play a role in helping bees fight parasites and pesticides.

The researchers then took those chemicals, added them to bee candy — a combination of sucrose and powdered sugar — and fed them to 15 worker bees. Another group got bee candy without any special compounds added. The team then dissected the mid-gut, or small intestine, of the bees, to see which genes were activated.

The bees that ate the honey chemicals showed activation in genes that are known to help bees fight parasites and break down pesticides, while those who ate the normal bee candy showed no such activation. One particular chemical, p-Coumaric acid, in particular, was tied to the gene activation.

The findings suggest that honey isn't just providing bees with a quick source of "fast food," but is also giving them compounds that keep them healthy.

It also suggests a potential way to strengthen bee colonies.

"P-Coumaric acid may ﬁnd use as an additive to honey substitutes to allow beekeepers to maintain colonies during food shortages, without compromising the ability of their bees to defend themselves against the pesticides and pathogens that currently bedevil beekeeping in the United States," the researchers wrote in the paper.

"I don't think we'll get beekeepers to go back to feeding their bees just honey. But scientists should try supplementing the corn syrup with these compounds, and hoping that replaces the good stuff in the honey," Evans told LiveScience.

Although this change alone may not prevent colony collapses, anything that strengthens the bees could help, Evans said.