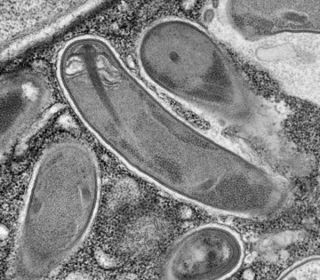 A new species of the tiny parasite was found in roundworms living in Parisian compost. Its spore – the stage that infects a host cell – is show above.
(Image: © Emily Troemel)

First they were fungi, then protists — and now they are fungi again. Once thought to be primitive, it now seems they have evolved backward, becoming simpler rather than more complex.

Microsporidia — single-celled parasites that include bugs implicated in the disappearance of honey bees — are strange. So far, about 1,300 species have been formally described, according to Patrick Keeling, a professor at the University of British Columbia who studies them. They are known to infect fish, birds, insects and even us, and Keeling only expects to see their ranks grow.

"There are probably as many microsporidia as there are animals," Keeling said. "We haven't found them in corals or sponges yet, but I don't think anyone is actively looking."

Evolution of an oddity

The first microsporidian identified was found infecting silkworms. In 1870, Louis Pasteur, the French chemist who invented the process of pasteurization, blamed it for a disease that had decimated the industry. Initially, they were classified as fungi, then renamed protists, a catch-all group for complex micro-organisms. As protists, they spent the better part of the 20th century in what Keeling refers to as a "grab bag," an unnatural group containing single-celled parasites later reclassified as animals and green algae. [10 Most Diabolical and Disgusting Parasites]

Members of microsporidia appeared to lack mitochondria — the energy-producing centers found in complex cells — and in 1983, this inspired scientists to propose that they were actually very primitive organisms that had evolved before mitochondria appeared among complex cells, Keeling wrote in 2009 in the journal PLoS Pathogens.

But new molecular evidence eventually challenged this, culminating in the discovery of tiny relics of mitochondria, called mitosomes, within microsporidia, according to Keeling. Rather than being primitive, it seems these organisms have become simpler — one could say more streamlined — than their ancestors. As a result of the new information, the tiny parasites were also, eventually, reinstated as fungi, which are complex organisms that cannot generate their own food, unlike plants. The group includes yeast, mold and toadstools.

"We know they are somehow related to fungi — there is a bit of an argument about whether they are fungi properly or just close relatives to fungi," Keeling said. "Fungi are not simple organisms; they are very complex organisms that are very closely related to animals."

In recent decades, microsporidia have inspired interest for another reason.

"It really wasn't known to be a problem for people until the AIDS crisis, then they found patients were dying of this diarrhea that was untreatable," said Emily Troemel, an assistant professor at the University of California, San Diego.

Microsporidia only grow inside a host organism's cells, making them much trickier to study than other pathogens, like most bacteria, which can be grown in a petri dish and manipulated. Troemel's lab is getting around this problem by looking at transparent roundworms whose guts have been infected by a microsporidian dubbed Nematocida parisii, or "nematode killer from Paris," because it was discovered in roundworms found in Parisian compost pits.

About four microsporidian genomes — their entire genetic blueprints — have been published, and Troemel is involved in coordinating an effort, based at the Broad Institute in Massachusetts, to sequence 11 more.

One thing is clear — microsporidia have tiny genomes. The first species sequenced frequently infects rabbits, and contained only 2,000 genes, half the number contained by the familiar bacterium, E. coli, which resides in our guts.

"The whole genome was just one big surprise. It is so small and so highly compacted and there was an amazing reduction in the number of genes," Keeling said.

The genetic code for a microsporidian responsible for human infections that cause diarrhea, Enterocytozoon bieneusi, contains another startling simplification. This parasite does not have any genes needed to convert sugars into energy, a fundamental process that allows cells to feed themselves.

It is tempting to compare stripped-down microsporidia with viruses, which, outside their host cell, are nothing but inert genetic material wrapped in a protein coat. (Viruses are also widely considered nonliving.) Keeling balks at this comparison, saying that microsporidia can be deceptive, but with E. bieneusi, the comparison gets a little warmer.

"No other organism is known to completely lack any form of energy metabolism except for viruses, if you consider them to be 'alive,'" he said. To feed itself, this microsporidian imports chemical energy, called ATP, from its host cell.

Microsporidia have an appropriately dramatic technique for infecting a cell. Their spores, the only stage to survive outside a host cell, have a thick, rigid wall with a tube coiled up inside it. In response to cues that are poorly understood, the spore ruptures its wall and the tube shoots out like a harpoon, and pokes into the future host cell. The remaining contents of the spore, including its command center, the nucleus, are then pumped through the tube into the host cell.

The most famous victims

The mysterious disappearances of honey bees began in the fall of 2006 in Florida and spread. Beekeepers found their colonies suddenly empty, except for the queen and a few workers, with no traces of dead bees. In the years since it was named, colony collapse disorder (CCD) has continued to devastate the insects crucial to pollinating crops in North America.

Jerry Bromenshenk, a research professor at the University of Montana, and colleagues have linked vanishing colonies in North America with a virus-fungal tag team. The virus is insect iridescent virus, named for the effect it creates in infected tissues, and the fungi is Nosema ceranae, a microsporidian. In a study published in October 2010 in the journal PLoS ONE, the team described finding this combo in bees from failing colonies, and by testing both pathogens in bees, they found that together, they were more lethal than if they infected bees separately.

Until 2007, N. ceranae infections had only been reported in Asian honey bees, not among the Western honey bees used in North America and elsewhere. The microsporidian has now been discovered in old samples going back to the 1990s, but it's possible the pathogen has been around even longer, according to Bromenshenk and colleague Colin Henderson, of The University of Montana College of Technology.

N. ceranae is now found nearly everywhere honey bees are kept, Bromenshenk said. He cautioned, however, that CCD does not appear to be behind most problems with honey bees elsewhere in the world.

Honey bees and other pollinators worldwide are facing a plethora of challenges: habitat alteration, urban sprawl, pollution, chemicals used in agriculture and the arrival of foreign species. "So there are lots of new pressures on these insects that could be behind some of the problems that are being seen," Bromenshenk said.

It's not the only microsporidia to infect honey bees. For instance, Nosema apis infects honey bees and has been around for a long time, although it has not been connected with CCD. Another microsporidian, Nosema bombi, has been found in elevated levels among declining species of bumble bees.