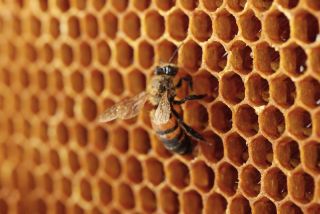 A bee tends to a honeycomb.
(Image: © Africa Studios, Shutterstock)

But honey-lovers hoping for something strange to put on their English muffins are likely to be disappointed: The oddly colored honey is not for sale, according to France24.

The bees, which hail from apiaries near Ribeauvillé in France's Alsace region, have acquired a taste for processed sugars at a local biogas plant that processes waste from a Mars chocolate factory, the maker of M&Ms. Instead of mining local wildflowers for nectar, bees have been sucking up colorful sugar at the plant.

So how does their chocolate-y diet led to colorful honey? Bees make honey by collecting nectar in a special storage stomach. Upon returning to the hive, the insects complete a tongue-to-tongue transfer of their sweet cargo to hive bees, which process the sugars in their own honey stomachs. The hive bees then deposit the processed mixture in honeycombs, where moisture evaporates out, leaving behind thick, sticky honey.

With dyes from the processed sugars turning the bees' honey blue and green, beekeepers can't sell their product, France24 reported. The mixture tastes like honey, local beekeeper André Frieh told the station, but he sees the substance as something else entirely.

Agrivalor, the company that runs the biogas plant, told French24 that it will keep waste M&Ms covered in the future and that it has cleaned its containers to attempt to solve the problem.