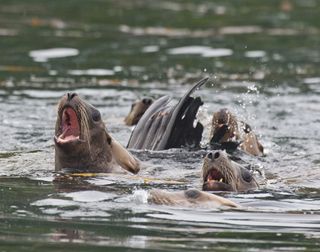 Cats will ignore your sugary treats, but will literally jump onto the counter at the chance to scarf down some meaty goodness. The behavior stems from a missing sweet-taste receptor on their tongues, and now researchers have found some of their carnivore cousins in the wild, including sea lions and hyenas, also lack the taste for sweetness.

Other carnivores, like bears, retain the sweetness receptor on their taste buds (causing Pooh Bear to keep getting his hand stuck in that honey pot), which might be because of their flexible diets, the researchers added.

"If you primarily eat meat, there isn't a need to detect carbohydrates [like sugars and starches], so there is no need to keep this receptor intact," study researcher Peihua Jiang, of the Monell Chemical Senses Center, a nonprofit scientific research institute in Philadelphia dedicated to the senses of taste and smell, told LiveScience.

Scientists have known since 2006 that domestic cats are missing the sweetness receptor; the study, published today (March 12) in the journal Proceedings of the National Academy of Sciences, extends that research. Jiang and colleagues looked at 12 different carnivores, from all different groups of animals, and analyzed their taste-receptor genes. [The 7 (Other) Flavors Humans May Taste]

"We wanted to see if the cat is the exception or if this loss of taste is more widespread in the animal kingdom," Jiang said.

The researchers compared the taste genes of 12 meat-eating species with that of the dog, which can taste sweetness. They saw the sweet-taste receptor was nonfunctional (the gene contained mutations that would stop it from making a functional protein) in seven of the 12 carnivores they tested: the sea lion, the fur seal, the Pacific harbor seal, the Asian otter, the spotted hyena, the fossa and the banded linsang (the last two are catlike mammals).

Both the sea lion and the bottlenose dolphin lack not only the sweet-taste receptor, but also the umami (a savory flavor, long recognized in the East) taste receptors. The dolphin seems to have even lost the ability to taste bitter substances, and has very few taste buds in general.

"We found out that for the species that have a unique feeding behavior, like the feline and dolphin, which for example swallow their fish whole without chewing, they are bypassing the sense of taste," and therefore don't need these taste receptors anymore, Jiang said. "They probably don't need to have a taste to determine what they eat. They may use other means to identify their food."

The researchers wanted to check that these defective genes led to differences in how an animal responds to different tastes. They analyzed how two carnivorous species, the Asian small-clawed otter and the spectacled bear, responded when given natural sugars and artificial sweeteners.

The Asian otter has a defective sweetness receptor, and didn't show any preference for sweet compounds, while the spectacled bear showed a strong preference for natural sugars and even some artificial sweeteners. This matches up with their taste receptor genetic data.

The researchers have previously tested several other carnivorous species, finding just one, the Asiatic lion, that didn't respond to sweetness; this lion, another feline species, also lacked the sweet-taste receptor.