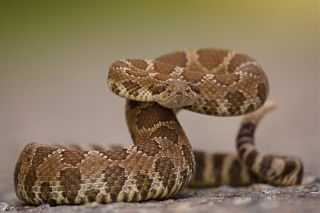 Opossums can feed upon some venomous snakes thanks to a resistance to the snakes' venom. In response, the snakes over generations have amped up the toxicity of their venom to keep these marsupial predators at bay.
(Image: © Tom Reichner | Shutterstock)

NEW YORK — Nature is full of poisons, and that can be good for humans.

Poisons cause harm by interfering with processes important for life. Some poisons, such as arsenic, occur in mineral form, but living things manufacture many of them. For example, plants, unable to escape from the multitude of other organisms that would eat them, make poisons to defend themselves. Animals and other organisms, too, ward off enemies with poisons.

"Poisons can be bad for some things and good for others, including humans," said Michael Novacek, senior vice president of the American Museum of Natural History, at an opening of a new poison-themed exhibition Tuesday (Nov. 12).

Often, these beneficial uses involve medicine. For example, wintergreen plants produce salicylic acid, which can be toxic at high concentrations. However, at a lower dose in a modified form, this chemical, becomes the active ingredient in aspirin.

The exhibition provides plenty of other examples of the "good" side of poison. Toxins from snakes, snails and fish provide established or possible treatments for pain; researchers are testing 300 chemicals produced by the Fraser Island funnel-web spider for treatments against breast cancer, and the plant sweet wormwood has provided the malaria medication artemisinin. [In Photos: The Power of Poison Through History]

And the benefits from natural poisons’ are not limited to just medicine. Many familiar substances — chili, tea, coffee, cinnamon, chocolate and nicotine — owe their spicy or stimulating effects to chemicals plants make to discourage other things from eating them. Nicotine, produced by tobacco and other plants, is a powerful neurotoxin, as it affects the nervous system, and theobromine, a chemical in chocolate that provides a mental lift to humans, has a much more powerful effect on dogs, said Mark Siddall, a museum scientist and invertebrate curator.

"There is enough theobromine in a square of baker's chocolate to seriously damage, if not actually kill, a Yorkie or Jack Russell terrier," Siddall said, noting the effect of a poison can vary depending on the organism that consumes it.

The strongest of poisons occur in evolutionary arms races, Siddall explained. For example, opossums can feed upon some venomous snakes thanks to a resistance to the snakes' venom. In response, the snakes over generations have amped up the toxicity of their venom to keep these marsupial predators at bay. Meanwhile, the opossums continue to evolve resistance to the ever-stronger venom, he said.

Another toxic battle, between bacteria and fungi, has provided humans with the antibiotic penicillin, which is produced by the penicillium mold to kill bacteria. [6 Ways Fungi Can Help Humanity]

Other organisms too, such as snakes, have chemical weapons to attack components of blood, including preventing clotting. Although the goal may be the same, different organisms employ different strategies. For instance, leeches seek to stop the activation of the clotting system. Meanwhile, one group of snakes produces compounds that thwart the clotting system by overactivating it, Siddall told LiveScience.

"The thing with snakes and leeches, anything that is venomous, there is a huge cocktail of individual toxins that are involved," he said. "It is really very complicated, and we are slowly teasing that out."

Like many other poisons, some leeches' blood toxins can be used to help rather than harm. Hirudin, an anti-clotting substance produced in the salivary glands of some leeches, is used in medicine.

The exhibition, The Power of Poison, opens on Saturday (Nov. 16) at the American Museum of Natural History in New York City and runs through Aug. 10, 2014.