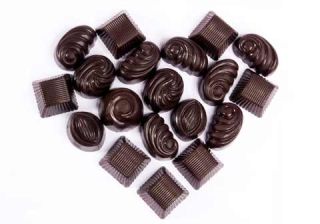 A bar of chocolate for your Valentine isn’t just a sweet treat, it can also be a boon to the body. The ways in which the compounds in chocolate interact with our bodies' systems, from the stomach to the heart, have been an active area of research in recent years. Several studies have found that in small amounts, dark chocolate in particular can help prevent the blood from clumping up, keep the heart healthy and even provide some anti-cancer benefits. Scientists caution that chocolate is far from being a cure-all, of course. But what could be better than knowing such an indulgence might be good for you? What chocolate is Chocolate is produced from the seeds of the cacao tree, which is native to parts of South America. The nibs at the hearts of the seeds are ground and liquefied into the pure chocolate form, chocolate liquor. The liquor can be separated into its two components, cocoa solids (the nonfatty component) and cocoa butter (the fatty part). As any chocolate lover knows, chocolate comes in many forms. The form depends on the relative amounts of cocoa solids and butter, as well as how much sugar and milk are added: Unsweetened, or baking chocolate is pure chocolate liquor; dark chocolate has a little fat and sugar added in; milk chocolate, as the name suggests, has milk added in on top of the fat and sugar; white chocolate has only the cocoa butter, and sometimes not even that, with vegetable oils added instead, in which case it isn't really chocolate. The less sugar and milk in the chocolate, the more bitter it tastes. But with that bitter taste (which varies depending on what percentage of the chocolate is pure cocoa), comes some possible health benefits. The darker, the better Studies have shown that dark chocolate contains certain antioxidants called polyphenols that could help fight chronic inflammation of tissues in the circulatory system, a risk factor for cardiovascular disease. One study of Italians showed that people who ate a moderate amount of dark chocolate daily (about 6.7 grams, or about the same amount of 1.5 Hershey kisses, though these are milk chocolate) had lower levels of a protein associated with inflammation. Other studies have shown that chocolate, like aspirin, makes blood platelets less likely to clump together into dangerous blood vessel-blocking clots by reducing their stickiness. Recent research has also suggested that these same antioxidants could help reduce the chances of developing cancer because they combat the cell damage that can lead to tumor growth. "The great news this Valentine’s Day is that in addition to being decadent and delicious, moderate amounts of dark chocolate may play a role in cancer prevention," said Sally Scroggs, M.S., R.D., L.D., health education manager at The University of Texas' Cancer Prevention Center. Curb your enthusiasm Dark chocolate is also more filling than milk chocolate, according to new research by scientists at the University of Copenhagen, suggesting it could reduce your cravings for other snacks or sweets. Participants in the study fasted for 12 hours, then ate either dark or milk chocolate and were then allowed to eat as much pizza as they wanted. The dark chocolate eaters ate less pizza. Of course, that doesn't mean you can eat that whole bar of chocolate in one go and expect health benefits. Moderation is key. And moderation can be hard. Some research suggests that certain people are "programmed" to like chocolate because of particular bacteria residing in their guts. However, true "chocoholics" don’t exist, one researcher says. But if the cravings for chocolate are just too much, research suggests a brisk walk could curb the desire to eat that whole heart-shaped box of decadence.