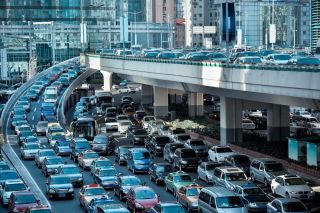 Every driver has experienced "phantom" traffic jams, in which dense traffic crawls to a halt for no apparent reason.

"You keep on saying, 'There must be an accident, or construction or something,'" said Massachusetts Institute of Technology (MIT) computer science professor Berthold Horn. "And then you drive and drive and drive ... and there isn't anything there."

Now, new research may have come up with a solution for this frustrating traffic pattern: maintaining equal spacing between cars on the road, rather than tailgating. [Humanoid Robots to Flying Cars: The 10 Coolest DARPA Projects]

Horn said phantom traffic jams are an emergent property of the flow of vehicles down a highway. A phantom jam begins when a car in dense traffic slows down even slightly, which causes the car behind that vehicle to slow even more — and the slowing action spreads backward through the lane of traffic like a wave, getting worse the farther it spreads.

Eventually, the cars far behind are forced to stop completely or risk hitting the slower vehicles ahead —and so the traffic grinds to a halt over nothing, Horn said.

Horn has been working on the problem of phantom traffic jams for years, and he has come up with a solution: By splitting the difference between the cars in front and the cars behind, the spacing of cars in a stream of traffic can act as a damper on phantom traffic jams. That is, it can prevent the slow-down effect from being amplified by the cars that follow behind, he said. In essence, each driver would constantly make adjustments to keep his or her car roughly halfway between the car in front and the car behind.

Horn calls this method of vehicle spacing bilateral control, and he said it could be achieved with relatively simple modifications to the adaptive cruise control (ACC) that many new cars already have. Such modifications, Horn said, could help fight phantom jams within a few years — maybe decades before an alternative solution, such as networked self-driving cars, becomes a reality on the roads.

Traffic congestion is caused by a number of factors, such as roads that are poorly designed or over-capacity, localized factors like city traffic-lighting patterns, and events like accidents and construction.

But phantom traffic jams can make all those problems worse, Horn said. And the researchers in the new study have calculated that solving phantom jams could save at least some of the estimated $121 billion per year that traffic congestion is estimated to cost the U.S. economy, Horn told Live Science.

The researchers made computer models of real-world traffic conditions, showing how a typical U.S. freeway could benefit from cars using bilateral control. That would be in place of the default of most human drivers, which is to tailgate or "ride the tailpipe" of the car in front of them by driving too close, Horn said.

"Under reasonable conditions today, you might get 1,800 cars per lane per hour throughput," Horn said: But "with bilateral control, you could almost double that."

The main alternative to increasing traffic throughput per lane has been to build more lanes and more highways, and putting in new roads is very expensive, he said.

"If we can increase the throughput on major highways, even if it's only by 50 percent, that would be a big deal," Horn said.

With the help of engineering students at high schools in Maine, Horn and Wang have also built a robot simulation that shows how bilateral control can suppress phantom traffic jams. Increasing the spacing of vehicles dampens the effect of slowdowns by cars in front of a given car, so that the slowing is not amplified until it becomes a phantom jam, the researchers said.

A video from the project shows a train of autonomous robots running along a track without bilateral control; they eventually back up in phantom jams. But when the robots are switched over to bilateral control (by flashing the lights in the room), each autonomous robot tries to keep itself halfway between the robot in front and the one behind; the phantom jams disappear as a result, Horn said.

Since starting his research on phantom traffic jams, Horn has learned that schools of fish and flocks of birds and bats use similar spacing strategies to avoid hitting each other while swimming or flying in densely packed groups.

In particular, studies of millions of bats emerging at dusk from caves in Southeast Asia showed that each bat used a form of bilateral control to reduce the likelihood of collisions with other bats in the densely packed swarm, Horn said.

Unlike bats, birds and fish, however, humans have difficulty judging distances behind them. To address that weakness, Horn is now working with the car company Toyota to enable a form of bilateral control via modifications to existing adaptive cruise control systems, which use forward-facing sensors to judge the distance to the vehicle ahead. The bilateral control approach would include adding rear-facing sensors to determine the distance to the vehicle following behind a car.

But until those systems become standard, human drivers can help reduce phantom traffic jams simply by not following other cars so closely, Horn said. "There's no advantage of riding up a tailpipe," he said.