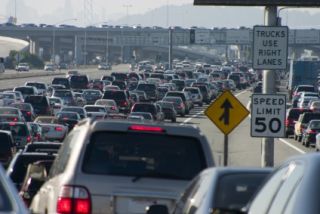 Some traffic jams have no apparent cause — no accident, no stalled vehicle, no lanes closed for construction. There is no easy way out of these maddening messes once you're stuck in them, but a new study has figured out how to reduce the odds of them forming at all.

These phantom jams can form when there is a heavy volume of cars on the road. In that high density of traffic, small disturbances (a driver hitting the brake too hard, or getting too close to another car) can quickly become amplified into a full-blown, self-sustaining traffic jam. A team of MIT mathematicians has developed a model that describes how and under what conditions such jams form, which could help road designers minimize the odds of their formation. 'Jamitons' — how they form and spread

Key to the new study is the realization that the mathematics of such jams, which the researchers call "jamitons," are strikingly similar to the equations that describe detonation waves produced by explosions, said Aslan Kasimov, lecturer in MIT's Department of Mathematics. That discovery enabled the team to solve traffic jam equations that were first theorized in the 1950s. The equations, similar to those used to describe fluid mechanics, model traffic jams as a self-sustaining wave. Variables such as traffic speed and traffic density are used to calculate the conditions under which a jamiton will form and how fast it will spread. Once such a jam is formed, it's almost impossible to break up — drivers just have to wait it out, said Morris Flynn, lead author of the paper on the work in the May 26 in the online edition of Physical Review E. However, the model could help engineers design roads with enough capacity to keep traffic density low enough to minimize the occurrence of such jams, says Flynn, a former MIT math instructor now at the University of Alberta. The model can also help determine safe speed limits and identify stretches of road where high densities of traffic — hot spots for accidents — are likely to form. Japanese study paves way

Flynn and Kasimov worked with MIT math instructors Jean-Christophe Nave and Benjamin Seibold and professor of applied mathematics Rodolfo Rosales on this study. The team tackled the problem last year after a group of Japanese researchers experimentally demonstrated the formation of jamitons on a circular roadway. Drivers were told to travel 30 kilometers per hour (18 mph) and maintain a constant distance from other cars. Very quickly, disturbances appeared and a phantom jam formed.

The denser the traffic, the faster the jams formed. "We wanted to describe this using a mathematical model similar to that of fluid flow," said Kasimov, whose main research focus is detonation waves. He and his co-authors found that, like detonation waves, jamitons have a "sonic point," which separates the traffic flow into upstream and downstream components.

Stuck in an informational black hole

Much like a black hole's event horizon (the sphere inside which no matter, light or any information at all can escape), the sonic point precludes communication between these distinct components so that, for example, information about free-flowing conditions just beyond the front of the jam can't reach drivers behind the sonic point.

As a result, drivers stuck in dense traffic may have no idea that the jam has no external cause, such as an accident or other bottleneck. Correspondingly, they don't appreciate that traffic conditions are soon to improve and drive accordingly. "You're stuck in traffic until all of the sudden it just clears," says Morris. In future studies, the team plans to look more detailed aspects of jamiton formation, including how the number of lanes affects the phantom traffic jams. The research was funded by the U.S. Air Force Office of Scientific Research, the National Science Foundation and the (Canadian) Natural Science and Engineering Research Council.