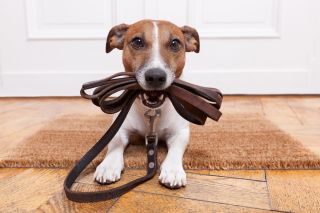 In the study, the researchers looked at the relationship between dog ownership and cardiovascular health. The results suggest that dog owners have a lower risk of heart disease because the four-legged friends provide social support and boost their owners' physical activity.

Owning a pet dog may be particularly beneficial for people who live alone, the study found. [7 Surprising Health Benefits of Dog Ownership]

"A very interesting finding in our study was that dog ownership was especially prominent as a protective factor in persons living alone, which is a group reported previously to be at higher risk of cardiovascular disease and death than those living in a multi-person household," lead study author Mwenya Mubanga, a doctoral student in the Department of Medical Sciences at Uppsala University in Sweden, said in a statement.

This is not the first study to suggest that dog ownership may be a boon to health. Multiple previous studies, for example, have found links between dog ownership and a lower risk of heart disease, according to the new study. And in 2013, the American Heart Association released a scientific statement to that same effect.

The new study, however, is "to our knowledge … by far the largest investigation of associations of dog ownership with human health reported to date," the researchers said in the study.

In the new study, the researchers looked at the heart health of more than 3.4 million adults ages 40 to 80 living in Sweden. Younger individuals were excluded from the study due to their low risk of cardiovascular disease, the researchers said.

The data were collected from Sweden's Register of the Total Population, which contains information on birth, migration, changes of citizenship, family and marital status, and death for all Swedish citizens and residents ages 18 and over. Specifically, the researchers chose to focus on data collected over a 12-year period, starting Jan. 1, 2001, according to the study.

To better understand the influence of pets on humans' heart health, the researchers compared the population data to records of dog ownership during that same 12-year period. (Every dog in Sweden must be registered with the Board of Agriculture.)

Overall, the results of the study showed that dog owners had a lower risk of death due to cardiovascular disease or other causes during the 12-year period, particularly for people living alone.

In addition, the researchers compared dog breeds. Their results revealed that dogs originally bred for hunting — such as terriers, retrievers and scent hounds — were associated with a lower risk of cardiovascular disease.

Although the new findings don't explain whether and how dogs could protect humans from cardiovascular disease, dog owners tend to have a higher level of physical activity, an increased level of well-being and more social contacts, the study said. Owning a dog could also change the type of bacteria found in a person's microbiome, which could impact his or her health, the researchers said.

One limitation of the study is that people who have dogs may already be healthier than non-dog owners. "There might … be differences between [dog] owners and non-owners already before buying a dog, which could have influenced our results, such as those people choosing to get a dog tending to be more active and of better health," senior study Tove Fall, an associate professor of epidemiology, also at Uppsala University, said in the statement.

In addition, the study was done in Sweden, so the results may not apply to other populations. However, Fall said that "thanks to the population-based design, our results are generalizable to the Swedish population, and probably also to other European populations with similar culture regarding dog ownership."

Their findings were published today (Nov. 17) in the journal Scientific Reports.