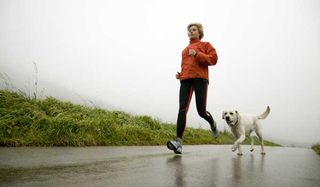 Owning a pet, especially a dog, probably lowers a person's risk of heart disease, a new statement from the American Heart Association says.

"There is a modest amount of data and reason to state that pet ownership may have some causal role in decreasing cardiovascular risk," said Dr. Glenn Levine, professor at Baylor College of Medicine in Houston, Texas, and chairman of the committee that wrote the statement.

Enough studies have looked at the question over the last decade that the time was right for a thorough scientific review of the data, Levine said.

The statement explains the evidence surrounding the question of whether pet ownership is linked with heart disease risk factors such as high blood pressure, obesity and physical activity levels.

Some studies that have looked for a link between pet ownership and blood pressure have found that people with pets tend to have lower blood pressure, and are less likely to have hypertension, than those who don't own a pet, the statement said. The only randomized controlled trial to look at the question included 30 participants, and found that when people adopted a dog, their blood pressure dropped.

Other evidence shows that people who own dogs are more likely than those who don't to reach recommended levels of physical activity, the statement said. It's likely that the benefit is seen because of the walking that some dog owners do. Owners who don't walk their dogs and owners of other pets were unlikely to see a benefit in physical activity levels in studies.

Walking a dog may also be linked with a lower risk of obesity, and may help with weight loss efforts in obese people, the statement said.

Few studies have looked at whether owning a pet is linked with levels of triglycerides (fats) in the blood, but the evidence does show that pet owners have lower levels.

The statement doesn't mean people should buy or adopt pets in hopes of improving their heart health, Levine said. "The primary reason to adopt, rescue or purchase a pet should be to give that pet a loving home, and to enjoy the relationship one has with a pet," he said.

People should not get a pet without implementing standard changes to lower their risk of heart disease, he said.

The statement is published online today (May 9) in the journal Circulation.

Pass it on: People with pets may have better heart health.