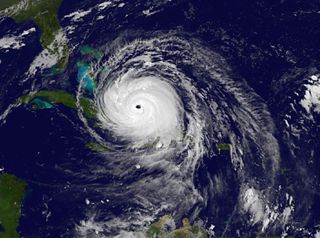 Hurricane Irma barreled through the Bahamas on Friday, Sept. 8. The eye of the storm is expected to continue moving near the Central Bahamas at about 14 mph (22 km/h). Here, an image taken at 4:45 a.m. ET on Sept. 8 by NOAA's GOES East satellite.
(Image: © NASA/NOAA GOES Project)

Ferocious Hurricane Irma continues to roar through the Atlantic on its path toward the Florida Peninsula.

As of 2 p.m. EDT today (Sept. 8), the eye of Hurricane Irma was located 57 miles (92 kilometers) off the northern coast of Cuba, according to the National Hurricane Center (NHC). The fierce Category 4 storm — with maximum sustained winds near 155 mph (250 km/h) — is currently forecast to move between Cuba and the Bahamas later today and tomorrow (Sept. 9). By Sunday morning (Sept. 10), the storm is expected to be near the Florida Keys and the southern Florida Peninsula, the center forecasts.

The hurricane is expected to make landfall in Florida 50 to 80 miles (80 to 130 km) west of Miami by Saturday night or Sunday morning, a westward shift from yesterday's predictions that the eye of the storm would hit Miami directly, according to Jeff Weber, a meteorologist for the University Corporation of Atmospheric Research in Boulder, Colorado. He suspects that at landfall on the Florida Peninsula, the hurricane will be a Category 4 storm, which is defined as having maximum sustained winds of 130 to 156 mph (209 to 251 km/h), according to the NHC. [Hurricane Irma: Everything You Need to Know About This Monster Storm]

"I would say, at this point in time, we're fairly certain about the track, but it could certainly drift 50 to 100 miles [80 to 160 km] east or west," Weber told Live Science. Even given this uncertainty in the predictions, Irma is expected to cause life-threatening damage to most of Florida, according to the NHC.

When Irma first arrives on the peninsula, the most significant causes of damage in southern Florida are expected to be very intense winds and storm surge, the abnormal elevation of water caused by the winds as they force water toward the shore, according to Dave Gochis, a scientist at the National Center for Atmospheric Research in Colorado. Along the southwest coast of Florida from Captiva to Cape Sable, storm surge is expected to cause 6 to 12 feet (2 to 4 meters) of flooding, according to the NHC.

Flooding due to storm surge will also be problematic along the southwest coast and in Miami, especially, where the extensive amount of pavement will likely prevent water from draining quickly, as has been the case in  Houston's flooding. And as the storm blasts northward up the Florida Peninsula, inland rainfall and runoff will likely cause moderate flooding across most of the state, Gochis told Live Science.

Track the path of the storm on this interactive NHC map.