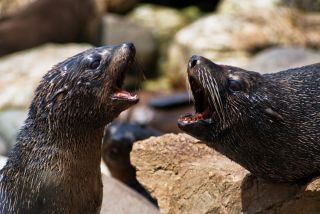 You'd yell too, if you had a seagull pecking at your butt.
(Image: © National Geographic Creative/Alamy)

For gulls in Chilean Patagonia, seal pup poop laced with parasitic hookworms is a tasty treat. But the eager birds are snapping up their meals just a little too near to the pups, to the detriment of the seals' tender rear ends, scientists discovered.

During routine exams of the South American fur seal pups (Arctocephalus australis) living on Guafo Island, researchers were puzzled by unusual wounds they found in the young animals' perineal area — around the anus.

Observations later revealed that gulls feeding on the pups' poo approached too close for comfort, jabbing their sharp beaks into the seals' bottoms, and creating gouges that sometimes led to serious infections, according to a new study. [Beastly Feasts: Amazing Photos of Animals and Their Prey]

Initially, the scientists wondered if the lesions on the pups' rears were caused by a viral or bacterial disease, the study's lead author, Mauricio Seguel, a doctoral candidate with the College of Veterinary Medicine at the University of Georgia, told Live Science.

But when the study authors couldn't pinpoint a microbial cause, they considered whether the wounds might be traumatic injuries, Seguel said.

Kelp gulls (Larus dominicanus) and dolphin gulls (Leucophaeus scoresbii) live alongside the seals on Guafo Island, and feed on seal feces produced by both adults and pups. The seal population in this area is known to be infested with hookworms, a common parasite in fur seals, and while adult seals mostly harbor hookworm larvae, the pups play host to hookworms in their adult forms, which they often expel in their feces.

The researchers discovered that the gulls were eating the parasites, along with the pup poop, and were so avid about it that they accidentally jabbed their beaks into the pups as they ate, according to the study.

In fact, the gulls became quite irate with the researchers when they visited the rookery to collect feces samples for analysis, Seguel told Live Science.

"We were basically stealing their food," he said.

If the gulls had been targeting the seal pups themselves as a food source, the damage to their rear ends would have been much more severe, and more pups would have been affected, Seguel explained.

However, in other parts of the world, gulls do inflict harm on baby seals deliberately, targeting the small and vulnerable young mammals as prey. In a 15-year study of kelp gulls and Cape fur seals (Arctocephalus pusillus pusillus), researchers recorded about 500 instances of gulls attacking baby seals' eyes. Approximately half of those attempts ended with the gull gouging and devouring the eyeballs, then shifting its attack to the seal's soft underbelly.

Kelp gulls are also known to prey on southern right whales and their calves swimming off the Argentinian coast, pecking and stripping flesh and blubber from the whales' backs when they surface to breathe, researchers reported in 2015. The tissue damage from these gull attacks can be so extensive that it covers 50 to 60 percent of a whale's body, Seguel told Live Science.

Incidences of gulls regularly attacking whales skyrocketed in the 1990s and 2000s, when an influx of fisheries in coastal regions inhabited by whales attracted growing numbers of seagulls, bringing a lot of hungry mouths to the area, Seguel said.

"As the populations of seagulls increased, it created the problem we're seeing now in Argentina," he said.

Typically, the Patagonia gulls do not prey on seal pups. But shifting conditions — such as rising ocean temperatures due to climate change — could alter the gulls' behavior, which could spell trouble for the animals that share their habitat, Seguel said.

"If there are any changes in the environment that could affect seagull populations in the future, it could also affect the other species that are interacting with the seagulls — like fur seals," Seguel told Live Science.

"We would like to keep this issue monitored, so we can try to figure out these things before they actually happen," he said.