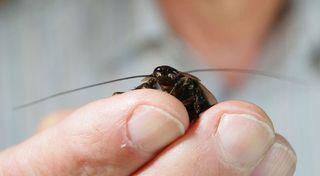 One of the cockroaches used in Vanderbilt's study on how a cockroach's biological clocks affects its learning ability.
(Image: © Daniel Dubois)

Most people find cockroaches repulsive, but not John Schmitt. A mechanical engineer at Oregon State University, Schmitt is using the leggy pests as a model for futuristic robots that can run effortlessly over rough terrain.

Current robots require too much computing power to get around, Schmitt explained. "We are trying to create robots that are more stable and take less energy," he said.

Unlike other creatures, cockroaches don't think about how they are going to run. When a roach comes across bricks that are three times as high as its hip, it only slows down by 20 percent. The legs move by instinct, not by reflex. Schmitt is working on designing robot legs that can do the same.

"Being able to recover the original running stride in the presence of rough terrain is important," Schmitt told LiveScience.

Right now some robots have been built that can walk, but none of them can run as well as their animal counterparts. Even walking robots absorb far too much energy and computing power to be very useful, Schmitt said.

Schmitt was inspired to model cockroach locomotion after reading a 2006 paper by Bob Full, a biologist from the University of California, Berkley, which showed that cockroaches move their legs before thinking.

Schmitt thought that trait could be useful in robots because it would help conserve computing power, so he and his team are trying to recreate it in computer models, and eventually in real robots.

A cockroach-inspired robot could run on autopilot in most circumstances, and would only have to stop and think about its next move when it encountered a large disturbance or obstacle.

"If you wanted surveillance, you'd build a legged robot, and scatter them around. They will communicate with each other and set up a reconfigurable wireless network," Schmitt said.

Insect-like robots could also be useful explorers on Mars or other off-world terrains.

"Mars rovers have problems with rocks," Schmitt said. "If you have something as small as cockroaches, small rocks won't be a problem."

In addition to cockroaches, Schmitt has studied the guinea hen. The chicken-like bird's legs act like springs when encountering a drastic change in the surface.

If a human performed like a guinea hen, they could run at full speed right into a 16-inch-deep hole and barely miss a beat, Schmitt said.

In a computer model, Schmitt and his team have created a concept that would allow a running robot to recover from a change in ground surface almost as well as a guinea hen. They are studying how the interplay of concepts such as energy storage and expenditure, sensor and feedback requirements, and leg angles can produce recovery from such disturbances.

Their research is detailed in a recent issue of the journal Bioinspiration and Biomimetics.