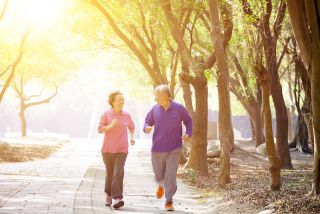 One-third of dementia cases could be prevented if more people could be helped to behave in ways that would improve their brain health, according to a new report.

Some public health strategies aimed at helping people to be healthy — for example, by staying in school past age 15, protecting their hearing in midlife and keeping up with exercise and hobbies in old age — could help to decrease the global numbers of dementia cases, the researchers said in their report, published today (July 19) in the journal The Lancet.

"Society must engage in ways to reduce dementia risk throughout life, and improve the care and treatment for those with the disease," study co-author Dr. Lon Schneider, a professor of psychiatry, neurology and gerontology at the University of Southern California, said in a statement. "This includes providing safe and effective social and health-care interventions in order to integrate people with dementia within their communities. Hopefully this will also ensure that people with dementia, their families and caregivers, encounter a society that accepts and supports them." [6 Big Mysteries of Alzheimer's Disease]

In the study, the researchers looked at previous research that has examined risk factors for dementia throughout people's lives. For example, they looked at studies that had examined the link between people's education, health, physical activity levels and the risk of dementia. The researchers then calculated and modeled the potential impact that reducing many different risk factors would have on the global prevalence of dementia.

The other six factors tied to dementia risk were high blood pressure and obesity in midlife, and the combination of depression, physical inactivity, social isolation and diabetes in people older than 65.

More research is needed to clarify exactly why and how each of these factors impacts a person's dementia risk, the researchers said. However, when it comes to the link between education and dementia, previous research has suggested that more education may increase a person's cognitive reserve — that is, the mind's resilience to brain damage that aging may inflict — the researchers said.

Smoking has a negative impact on the cardiovascular system, and previous research has linked cardiovascular problems with dementia, the researchers said.

Social isolation may lead to a decline in cognitive activity, which previous research has linked to accelerated cognitive decline, the researchers said. [6 Foods That Are Good For Your Brain]

The link between depression and dementia remains largely unclear, but one possible mechanism is that depression may affect the growth of brain cells and the volume of the hippocampus — a major brain component — thus upping the risk of dementia, the researchers said.

Further research is needed to understand the link between hearing loss and dementia, and to determine whether hearing aids may help to alleviate the impact of hearing loss on dementia risk, the researchers said.

The report had certain limitations, the authors said. For example, the authors did not consider diet and alcohol in their estimates, and these factors may also be a factor in people's dementia risk, according to the report.