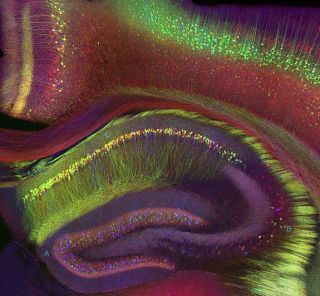 Aging can be slowed down or sped up by activating or deactivating a pathway in a mouse's brain (shown above: hippocampus region of a mouse brain).
(Image: © Tamily Weissman, Jeff Lichtman, and Joshua Sanes, 2005.)

For the first time, a brain region has been found that may control aging throughout the whole body, a new study reports.

A signaling pathway in the brain region known as the hypothalamus could speed up or slow down aging in mice. If it applies in humans, the discovery could open up possibilities for slowing age-related diseases and increasing life span.

"There's really not much understanding regarding the mechanism of aging," said senior author Dr. Dongsheng Cai, a molecular pharmacologist at Albert Einstein College of Medicine in New York. [Extending Life: 7 Ways to Live Past 100]

The process of aging could involve chaotic, passive changes in individual tissues or organs, or it could be controlled centrally by a single organ — or both, Cai told LiveScience.

The hypothalamus, an almond-size structure deep inside the brain, is known to control important functions, including growth, development, reproduction and metabolism. Now, Cai and his team have found that an immune system pathway in the hypothalamus also has a role in controlling aging. Usually, the immune system is involved in fending off infection or damage, but studies have also linked inflammatory changes with age-related conditions, including cardiovascular disease and neurodegenerative diseases. Still, these changes weren't known to actively trigger aging.

In the study, Cai and his colleagues probed the hypothalamus's role in aging in mice. The team studied a protein complex called nuclear factor kappa-light-chain-enhancer of activated B cells (NF-κB), which plays a central role in inflammatory processes.

The researchers showed that activating the NF-κB pathway in the mouse hypothalamus sped up aging, demonstrated by decreased muscle strength and size, skin thickness and learning ability. The activation led to aging throughout the body that shortened the life span of the mice.

In contrast, when the researchers blocked the NF-κB pathway, the mice aged more slowly and lived about 20 percent longer than mice that didn't receive the treatment.

Furthermore, activating the NF-κB pathway led to a drop in the levels of gonadotropin-releasing hormone (GnRH), a neuron-generating chemical, and a subsequent decrease in the development of new neurons. GnRH is known to regulate reproductive processes, but seems also to be necessary for maintaining youthfulness, Cai said.

When the researchers injected GnRH into the hypothalamuses of mice, it promoted neuron generation and decelerated aging. The team gave daily GnRH injections to old mice over an extended period, finding that the treatment slowed cognitive decline due to aging.

Putting the brakes on aging

GnRH treatment represents a potential means of slowing the progress of aging or age-related diseases, the researchers say. Interfering with the immune response in the hypothalamus could also be a promising approach, Cai said, though he added that the GnRH treatment might be more practical given current technology.

Aging researcher Caleb Finch of University of Southern California Davis School of Gerontology, who was not involved in the work, called it a "brilliant study." Finch has previously argued that the hypothalamus contains "pacemakers" that control the rate of aging. The new study's approach showed a more modest increase in life span than approaches such as calorie restriction (which has been shown to extend life span in mice), Finch said. "Nonetheless, the case is now powerfully made for the role of the neuroendocrine mechanisms as modulators of aging."

Next, the researchers hope to gain a deeper understanding of the molecular function of the hypothalamus in controlling aging and life span. "There are a lot of details we don't know," Cai said, such as the other molecules that are involved. The team is ultimately interested in translating their work into clinical efforts to slow down aging.

The findings were reported online today (May 1) in the journal Nature.