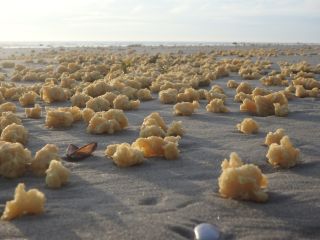 Hundreds of yellow, fluffy blobs of mystery material have washed up on the shores of northern France in the past week.

The balls of goo have been found along many miles of the English Channel coastline, according to the Sea-Mer Association, a nonprofit organization that protects coastlines from pollution. [Photos: Weird Yellow Fluff Balls Wash Up on French Beaches]

The mysterious yellow clumps look like sponges, very unappetizing hunks of butterscotch mousse or possibly the biggest balls of earwax ever. Tons of them have washed up along a tourist-magnet stretch of France's Opal Coast.

So far, nobody knows exactly what the mystery material is, though one leading contender is paraffin wax.

Authorities claim the yellow spongey masses aren't dangerous, at least to their knowledge, the daily news site The Local reported. The samples are being sent to CEDRE (The Center for Documentation, Research and Experimentation on Accidental Water Pollution), which should have results within a week, La Voix du Nord reported.

However, Jonathan Hénicart, president of the Sea-Mer Association, told a local French TV news channel that there's no way to know for sure if the material is safe and so it shouldn't be touched.

"It seems to come from an oil product," Hénicart told channel BFMTV. "It could come from a polyurethane product commonly used for building. And it smells very, very lightly of paraffin."

Hénicart told La Voix du Nord that the brittle material is greasy to the touch, but looks a bit like yellowpolyurethane balls. One theory is that the material comes from the hot grease in boat exhaust, which freezes when it hits frigid seawater, La Voix du Nord reported.

In an email to Live Science, Hénicart said the material that washed ashore this week does not look like polyeurethane foam, but instead looks more like paraffin, or candle wax, which frequently washes ashore along coastlines. For instance, in May, waxy yellow clumps washed ashore North Yorkshire beaches, the BBC reported. In the aftermath of German beachcontamination with paraffin, the North and Baltic seas were extensively polluted with paraffin wax, according to a 2014 report by the independent Unilever Environmental Group. However, this material doesn't melt in the sun like paraffin.

Paraffin wax is typically made up of long strands of hydrocarbons and is used for insulation, lubrication, corrosion protection, cosmetics and candles. Paraffin is often transported in large quantities by tanker ships, and because it floats, will rise to the top of the water and wash ashore in clumps, where it mixes with sand and other contaminants, according to the 2014 report.

The coastline of the English Channel, where the goo was sighted, sees heavy shipping traffic. As a result, weird things washing ashore are not uncommon. In general, beaches are both idyllic and the source of some truly weird flotsam. From dead, rotting whales, to ice balls, to mysterious sea pickles, odd, gross and perplexing items are always being tossed onto land by the sea.