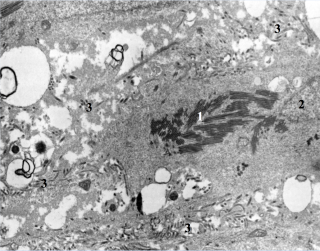 In this image, particles of Ebola virus are replicating in liver tissue.
(Image: © Elena Ryabchikova, Institute of Chemical Biology and Fundamental Medicine, Siberian Branch of Russian Academy of Science)

The West African Ebola outbreak, which peaked between August and September 2014, killed 11,310 people, according to the World Health Organization. But some people survived, and from one comes hope.

Researchers report today (May 18) in the journal Cell that the blood from one of the survivors contains remarkable antibodies that block not just one strain of Ebola from infecting animal cells, but stops all five known strains.

The antibodies could lead to an effective therapy to the disease in humans, or a vaccine that prevents any version of Ebola from infecting a person in the first place.

"We've identified multiple antibodies that are broadly neutralizing and protective," said the study's co-leader, Kartik Chandran, a professor of microbiology and immunology at the Albert Einstein College of Medicine in New York. [The 9 Deadliest Viruses on Earth]

The idea, he said, is to mix the right amount of antibodies together and make a "drug cocktail" that could attack the Ebola virus a couple of different ways.

In their study, the researchers turned to an Ebola survivor to look for such antibodies. Once a person has been infected with Ebola, it is likely that their immune system has produced antibodies to protect them against future infections.

The very first outbreaks of Ebola happened in 1976, and affected mainly rural areas of what is now Nzara, South Sudan, and the Democratic Republic of Congo. Because of the remoteness and the lack of understanding of what was happening, fatality rates rose to as high as 90 percent.

During the most recent outbreak, which ended in 2016 and afflicted both urban and rural areas of Guinea and then spread to Sierra Leone and Liberia, about 50 percent of the people who came down with Ebola died, according to the World Health Organization.

Both outbreaks were caused by the strain of Ebola virus known as "Ebola Zaire.” Today, the most advanced therapy against Ebola is a drug called ZMapp, which works in people infected with Ebola Zaire. Unfortunately, it doesn’t work against other strains that have cropped up here and there in parts of Africa, including Sudan ebolavirus and Bundibugyo ebolavirus.

ZMapp doesn't work in all Ebola strains because, like all viruses, Ebola viruses are in a constant state of mutation as they evolve to develop more clever ways to evade the human immune system. [27 Devastating Infectious Diseases]

Using biological camouflage and molecular sleight of hand, the virus maneuvers through the bloodstream, keeping its one weapon — a dagger of protein covered in sugar molecules called a spike glycoprotein — out of sight.

This glycoprotein starts the infection of a cell, binding to it and mediating the process of the hostile takeover. During that process, the virus merges with the cell, like two soap bubbles merging, Chandran said. Once they've joined, the virus dumps its genetic information into the cell, which begins to replicate the virus and create other Ebola viruses.

As the human immune tries to combat an Ebola virus, it focuses on the spike glycoprotein, generating different varieties of antibodies in an attempt to make one that can locate a vulnerability. It's not easy. The coating of sugar molecules allows this virus to hide in plain sight, Chandran said. Other pieces of the glycoprotein specialize in distracting the immune response. They behave like decoys, drawing an antibody's attention away from other parts of the virus.

Despite the camouflage and decoys, the glycoprotein has bald spots: sticky, harpoon-like features that are not covered in sugar molecules. Sometimes, if a person who's infected with Ebola is lucky, his or her antibodies will find these bald spots, bind to them and stop the virus from taking over the cell.

"In this paper, we define a couple of those antibodies," Chandran said.

The antibodies come from a person from West Africa who became infected with Ebola Zaire in December 2013. A previous study from Zachary Bornholdt, director of antibody discovery at Mapp Biopharmaceutical, which makes ZMapp; and Laura Walker, a senior scientist at Adimab, identified 349 distinct antibodies in this person's blood.

In the new study, Chandran, Bornholdt and their colleagues discovered that two of the antibodies — known as ADI-15878 and ADI-15742 — neutralized all five known strains of Ebola and protected mice and ferrets from a lethal dose of the three major strains of Ebola: Zaire ebolavirus, Bundibugyo ebolavirus and Sudan ebolavirus.

If a future drug for humans can be made from these antibodies, having more than one antibody in that drug would be better than having just one, the researchers said, because if one fails, the others can keep the virus at bay. Scientists can also engineer a vaccine that coaxes the immune system to create these specific types of antibodies.

"Our study indicates that it may be possible," Chandran said.