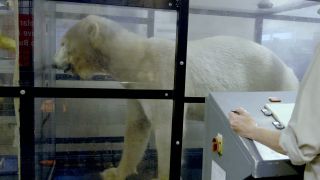 A polar bear named Tatqiq walks the walk, taking a turn on a treadmill for research on polar bear stamina.
(Image: © The Zoological Society of San Diego)

A polar bear at the San Diego Zoo named Tatqiq recently went the extra mile to help scientific research by steadily plodding along on a treadmill at the zoo's Institute for Conservation Research.

Five months of training prepared the 16-year-old bear for her 10-minute walk, zoo officials said in a statement. With every step the bear took in the enclosed treadmill, biologists tracked her movements and activity levels, so they could better understand how polar bears expend their energy.

Polar bears hunt on sea ice, which is rapidly diminishing in a warming Arctic; more and more frequently, they must swim or walk long distances between meals. Data from Tatqiq's treadmill traipsing could help researchers forecast how polar bears will fare in the future, as sea ice in their polar habitat continues to shrink. [Animals on Treadmills Walk, Scamper and Scurry for Science | Video]

"Little information exists on the number of seals polar bears need to eat in the wild," Anthony Pagano, a wildlife biologist with the U.S. Geological Survey (USGS) polar bear research program, said in the statement.

"The data we're collecting from Tatqiq will allow us to quantify the impacts of declines in Arctic sea ice on polar bear energy demands," Pagan said.

Video footage of Tatqiq on the treadmill shows her moving at a slow and steady pace, wearing a bulky collar that holds an accelerometer — a sensor that detects movement and speed. Her readings, which represent the oxygen consumption of a healthy bear, can be used to estimate the stamina of wild bears, and to predict how they might be affected by having to work harder to find and catch their prey.

"The ice sheets where they hunt are vanishing," Nate Wagner, a senior keeper at the zoo, said in a statement.

"Polar bears can swim 30 miles in open ocean, but because of climate change, the resting places they go to after that long swim may not exist anymore. They need to find other resources," Wagner said.

And when polar bears rest on land, they're also fasting, dropping an average of 2.2 pounds (1 kilogram) of body mass each day, zoo officials said. Recent studies of wild bears show that shrinking ice is taking a toll on their ability to weather lean conditions, with fewer bears observed, and more of them showing poor body condition, officials explained. Tatqiq's treadmill performance could provide researchers with a clearer picture of how polar bears respond physically to environmental challenges.

"The data that we are collecting through Tatqiq's participation in this study is critical, and simply unattainable in the wild," Megan Owen, associate director of Recovery Ecology at the Institute for Conservation Research, said in a statement. "Ultimately, what we are learning from Tatqiq will improve our understanding of just how sea ice losses are driving declines in polar bear populations, and will inform future management efforts in support of recovery."