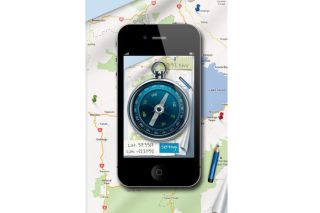 An iPhone compass app uses the phone's accelerometer to tell which direction you are facing.
(Image: © Apple.com)

When you use a compass app on your smartphone, it somehow knows which direction the phone is pointing. With stargazing apps, it somehow knows where in the sky you’re looking to properly display constellations. Smartphones and other mobile technology identify their orientation through the use of an accelerator, a small device made up of axis-based motion sensing.

The motion sensors in accelerometers can even be used to detect earthquakes, and may by used in medical devices such as bionic limbs and other artificial body parts. Several devices, part of the quantified self movement, use accelerometers.

An accelerometer is an electromechanical device used to measure acceleration forces. Such forces may be static, like the continuous force of gravity or, as is the case with many mobile devices, dynamic to sense movement or vibrations.

Acceleration is the measurement of the change in velocity, or speed divided by time. For example, a car accelerating from a standstill to 60 mph in six seconds is determined to have an acceleration of 10 mph per second (60 divided by 6).

The purpose of the accelerometer

The application of accelerometers extends to multiple disciplines, both academic and consumer-driven. For example, accelerometers in laptops protect hard drives from damage. If the laptop were to suddenly drop while in use, the accelerometer would detect the sudden free fall and immediately turn off the hard drive to avoid hitting the reading heads into the hard drive platter. Without this, the two would strike and cause scratches to the platter for extensive file and reading damage. Accelerometers are likewise used in cars as the industry method way of detecting car crashes and deploying airbags almost instantaneously.

In another example, a dynamic accelerometer measures gravitational pull to determine the angle at which a device is tilted with respect to the Earth. By sensing the amount of acceleration, users analyze how the device is moving.

Accelerometers allow the user to understand the surroundings of an item better. With this small device, you can determine if an object is moving uphill, whether it will fall over if it tilts any more, or whether it’s flying horizontally or angling downward. For example, smartphones rotate their display between portrait and landscape mode depending on how you tilt the phone.

An accelerator looks like a simple circuit for some larger electronic device. Despite its humble appearance, the accelerometer consists of many different parts and works in many ways, two of which are the piezoelectric effect and the capacitance sensor. The piezoelectric effect is the most common form of accelerometer and uses microscopic crystal structures that become stressed due to accelerative forces. These crystals create a voltage from the stress, and the accelerometer interprets the voltage to determine velocity and orientation.

Accelerometers are made up of many different components, and can be purchased as a separate device. Analog and digital displays are available, though for most technology devices, these components are integrated into the main technology and accessed using the governing software or operating system.

Typical accelerometers are made up of multiple axes, two to determine most two-dimensional movement with the option of a third for 3D positioning. Most smartphones typically make use of three-axis models, whereas cars simply use only a two-axis to determine the moment of impact. The sensitivity of these devices is quite high as they’re intended to measure even very minute shifts in acceleration. The more sensitive the accelerometer, the more easily it can measure acceleration.

Accelerometers, while actively used in many electronics in today’s world, are also available for use in custom projects. Whether you’re an engineer or tech geek, the accelerometer plays a very active role in a wide range of functionalities. In many cases you may not notice the presence of this simple sensor, but odds are you may already be using a device with it.