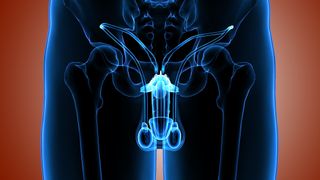 The testicles are housed in the scrotum just behind the penis.
(Image: © Life science of anatomy/Shutterstock)

Anatomy of the testis

Testicles, or testes, are oval-shaped organs located in the scrotum, just behind the penis and right in front of the anus on male humans. Each testis weighs 0.35 to 0.5 ounces (10 to 15 grams), according to Virtual Medical Centre (VMC). They are typically 2 inches (5 centimeters) long, 1.2 inches (3 cm) wide and 1 inch (2.5 cm) thick.

The scrotum is a loose sack of skin that protects the testicles and acts as a climate control system. The testes must be at a temperature slightly cooler than the body temperature for normal sperm development. Muscles in the wall of the scrotum allow it to tighten and relax, moving the testicles closer to the body for warmth or farther away to cool them, according to the Cleveland Clinic.

Each testicle consists of a series of small tubes, or tubules, that contain testosterone and sperm-producing cells. Seminiferous tubules house germ cells — the 23 chromosome cells that men replicate to produce sperm — and they are the site of sperm production, or spermatogenesis, according to VMC. These tubules are tightly coiled within the testis, and each testis may contain up to 900 tubules. The tubules are almost 20 inches (50 cm) long, and a typical testis contains up to half a mile (800 meters) of seminiferous tubules.

Besides sperm, testicles also produce male hormones called androgens. Androgens control how the male reproductive system grows, and the development of "masculine" body features such as beards and a deep voice. They also influence sexual functions.

Testosterone is the most common form of androgen. It is responsible for the growth of male genitals and sperm production. Testicles in a healthy male can produce about 6 milligrams of testosterone each day, according to VMC. This isn't always the case, though.

"The testis make 200,000 sperm per minute on average," said Dr. Philip Werthman, a urologist and director of the Center for Male Reproductive Medicine and Vasectomy Reversal in Los Angeles, California. However, "as a man gets older and into his 30s, the amount of testosterone the testis produces starts to drop and continues to decline."

Typically, every male is born with two testicles. They form in the abdomen, and drop into the scrotum during their seventh month of gestation.

Sometimes, though, the testicles do not drop, and the baby is born with a condition called undescended testicles. This happens for about 2 percent of males, and in 10 percent of those cases, both testicles are not in their proper position, according to the Mayo Clinic. Typically, this is a problem associated with preemies and the testicles often "drop" within a few months. If not, surgery may be required.

Once testicles have dropped, they may not stay there. Retractile testicle is when a testicle moves into the groin area. Usually, a doctor can move the testicle back into its proper position, but if it is stuck, it is called an ascending testicle or an acquired undescended testicle. In this case, surgery may be needed to move it into proper position and stitch it into place.

A more serious condition of this organ is testicular cancer. It usually occurs in men 15 and 34 years old. In 2017, around 8,850 new cases of testicular cancer will be diagnosed and 410 deaths will be attributed to testicular cancer in the United States, according to the American Cancer Society. Though these numbers seem large, only around about 1 in 263 males get this type of cancer. Testicular cancer can be caused when the germline stem cells don't turn into sperm cells after a long period of time, according to National Geographic.

Poor health can lead to lower sperm and testosterone production. Maintaining a healthy weight is a large part to good testicular health. According to the Centers for Disease Control and Prevention (CDC), the chance of infertility increases by 10 percent for every 20 pounds a man is overweight. Avoiding periodontal disease, STIs, stress, smoking, excessive drinking and a poor diet can also be good for a male's reproductive health.

Keeping the testicles cool, just below normal body temperature, can also increase sperm count and quality, according to England’s National Health Service. An easy way to keep them cooler is by wearing loose clothing and by taking breaks often when in warm environments.