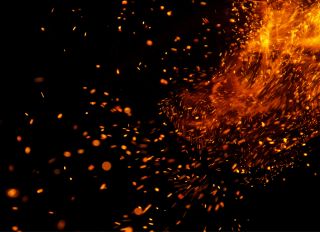 Fans of the podcast "S-Town" know that the main character, John McLemore, enjoyed a dangerous hobby called fire-gilding. The ancient process may sound like magic — turning dingy metals into brilliant gold or silver — but what's really going on is some straightforward science.

Fire-gilding was used to transfer gold or silver onto another object, said Tami Clare, an associate professor of chemistry at Portland State University in Oregon. The earliest use dates back to the 4th century B.C. in China, she said. Then, a bit later, it was used in the 2nd century A.D. in Europe, Clare said.

The process involves mercury and another metal, either silver or gold, Clare told Live Science. At room temperature, mercury is in a liquid state, whereas silver and gold are solid, she said. For gold to melt into its liquid state, for example, it would have to be heated to more than 1,800 degrees Fahrenheit (1,000 degrees Celsius). [Elementary, My Dear: 8 Elements You Never Heard Of]

But when gold or silver is added to mercury at room temperature, the metals dissolve, forming an amalgam, Clare said. This mixture is thicker than mercury on its own; it can be spread like butter, she added.

After the the desired metal is dissolved in mercury, the resulting mixture is spread onto the object that the fire-gilder wants to color, Clare said. Copper-based materials, including brass and bronze, work best, because the mixture can adhere to them, she added.

The next step is where the fire comes in: Using fire, the mercury is boiled away, leaving behind the gold or silver, Clare said. Mercury boils at a relatively low temperature for a metal: 675 degrees F (357 degrees C), she said. For comparison's sake, gold boils at 4,712 degrees F (2,600 degrees C).

After the mercury is boiled off, the gold or silver layer that remains looks dull and lumpy, Clare said. This layer needs to be burnished with a hard, smooth stone to give the surface a smooth and shiny look, she said.

The process may sound simple, but it's dangerous because it involves boiling off the mercury, which releases elemental mercury into the air that a person can breathe in, Clare said. Mercury is a neurotoxin, and chronic exposure to it can cause mercury poisoning and other serious problems, she said. The process also releases mercury into the environment, she added.

Indeed, the risks of vaporizing mercury are why the technique is banned in many countries, Clare said.