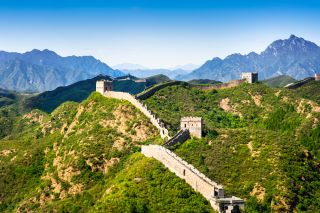 How long is the Great Wall of China? Longer than was previously thought, a new survey reveals.
(Image: © Mila Semenova, Shutterstock)

The Great Wall of China is more than twice as long as originally believed, according to the first definitive archaeological survey of the iconic ancient defensive structure.

Released by the State Administration of Cultural Heritage (SACH), the survey began in 2007, mapping every trace of the wall across 15 Chinese provinces.

A total of 43,721 heritage sites were identified during the survey, "including stretches of the wall, defense works and passes, as well as other related Great Wall facilities and ruins," said Tongo Mingkang, SACH deputy chief.

Known to the Chinese as the "Long Wall of 10,000 Li", the Great Wall is the world's largest human-made structure -- a series often overlapping fortifications made of stone, bricks and earthen works whose construction begun as early as the 7th century BC.

The defensive structure was first linked up under Emperor Qin Shi Huang in about 220 BC to protect the ancient Chinese empire from marauding tribes from the north.

Since then, many dynasties have maintained and renovated the wall. The majority of the existing structure was reconstructed during the Ming Dynasty (1368-1644).

Today, only 8.2 percent of the wall built during the Ming Dynasty is intact, with the rest in poor condition, said the report.

Listed as a UNESCO world heritage site in 1987, the wall has been heavily damaged from human activities, infrastructure development and tourism.

A large amount of the wall has collapsed and in some sections, only its foundation remains, the five-year survey concluded.

"The saving and preserving of the Great Wall's relics should not be delayed," the report stressed.

By 2015, the SACH will establish general guideline for protection of the Great Wall and set up a monitoring system to ensure effective preservation, the state-run Xinhua news agency reported.