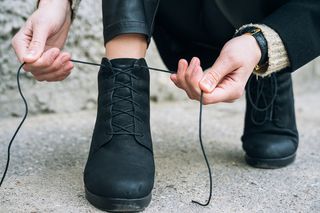 Scientists have unraveled a knotty problem: the forces behind the accidental untying of shoelaces.

For the first time, researchers documented the mechanics of shoelace knots in motion, to understand what makes them loosen and ultimately fall apart. They discovered that walking and running produce unexpectedly powerful forces — stronger than the most powerful roller coaster — that act upon both the shoelaces' knot and the bows and loose ends.

First, the knot begins to loosen. Once that happens, the action of the flapping ends escalates the unraveling until the knot unravels, which happens very suddenly, the scientists wrote in a new study. [Unraveled! Solving the Knotty Problem of Untied Shoelaces | Video]

Scientific discoveries often stem from curiosity about everyday questions. Study co-author Oliver O'Reilly, a professor of mechanical engineering with the University of California, Berkeley, told Live Science that he had wondered for years about why his shoelaces kept untying no matter how carefully he knotted them.

And then recently, when he was teaching his young daughter how to tie her shoes, he noticed that there were plenty of instructional videos online demonstrating the process — but nothing that explained why they come untied.

O'Reilly and his colleagues borrowed a high-speed camera and filmed the shoe-clad feet of co-author and avid runner Christine Gregg, a researcher and doctoral candidate at UC Berkeley, as she ran on a treadmill.

"Nothing happened for a really long time," O'Reilly told Live Science. "And then, all of a sudden, everything happened — the shoelace unraveled really quickly. This unraveling and how fast it happened really surprised us, and we set about trying to find out how it happened," he explained. [The Mysterious Physics of 7 Everyday Things]

To see how running deformed the knot, they used an accelerometer — a device that measures motion — and discovered that the gravitational force, or g-force, acting on the shoelace knot was surprisingly high: up to 7 G, O'Reilly said. To put that into perspective, the most powerful roller coaster in the world — the Tower of Terror in Johannesburg, South Africa — produces a g-force of 6.3 G, O'Reilly said.

"And your shoelaces are subjected to this force with every running step," he said.

As running action repeats, the knot begins to deform and loosen. At the same time, the bows and ends of the lace are flapping back and forth, and they begin to slip through the knot, much as they do when you deliberately untie a bow.

"The flapping motions back and forth actually increase inertial forces on the free ends," O'Reilly said. "That exacerbates the imbalance. Then they pull through, and then the shoelace has failed."

Next, the scientists repeatedly tested two of the most commonly used shoelace knots — both are variations of the double slipknot, but one has proven to be more robust than the other — using dress shoelaces and a pendulum that mimicked the action of a human stride. For 15 minutes at a stretch, the pendulum rocked weighted laces back and forth, with the rocking motion simulating a leg's swing and the weights simulating the impact of a foot hitting the ground.

They found that within the 15-minute periods, all of the weak knots failed. Some of the strong knots failed as well, and more of them came undone when more weight was added to the laces. So, while some types of knots may hold longer than others, the forces that are at work eventually cause an "avalanche effect" that will likely tease out even the most tenacious knot, Gregg said in a statement.

These findings resolve a mystery that may date back to when the first primitive shoe was laced up, thousands of years ago. Though it is not known exactly when people first discovered that they could secure shoes with strips of leather or with string crafted from plant material or other fibers, one of the earliest known examples of a type of shoelace is about 5,300 years old, and was part of the shoes found with the remains of the mummified man known as Ötzi.

Questions remain about why some shoelace knots are more secure than others, and future studies could explore the mechanics of weak versus strong knots to better unravel what makes some fail more quickly than others, O'Reilly told Live Science.

But until science figures that out, everyone will just have to keep re-tying their shoelaces when the knots fall apart — except, of course, 89 lucky people who, in October 2016, managed to snag a pair of Nike's self-lacing shoes, which were based on the sneakers worn by actor Michael J. Fox in 1989, as Marty McFly in "Back to the Future Part II."

The findings were published online today (April 11) in the journal Proceedings of the Royal Society A: Mathematical and Physical Sciences.