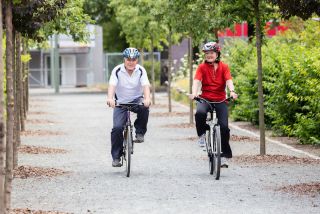 As people get older, their brains typically shrink. But a new study shows that this shrinkage happens much slower in the "SuperAgers," a group of people in their 80s and 90s whose sharp memories defy their years.

The researchers at Northwestern University's Feinberg School of Medicine who coined the term have found in previous studies that these individuals, who are all ages 80 and older, performed at least as well as healthy people in their 50s and 60s on tests of episodic memory. This type of memory involves recalling an event, whether in the recent or distant past, such as what you ate for dinner last night or what happened at your 10th birthday party.

This is the type of memory that declines in people with Alzheimer's disease, said study author Amanda Cook, a doctoral candidate in clinical neuropsychology at Northwestern. [6 Big Mysteries of Alzheimer's Disease]

In the latest analysis, the researchers looked at brain scans taken 18 months apart in the same individuals. Results showed that the SuperAgers lost an average of 1.06 percent of the volume of the brain's cortex per year, while the comparison group, comprising older adults of similar ages and average cognitive skills, lost 2.24 percent, according to the findings published today (April 4) in the Journal of the American Medical Association (JAMA).

In other words, the SuperAgers still showed some brain shrinkage, but their brains diminished at about half the rate of their cognitively average peers, Cook said.

The difference in the amount of shrinkage between the groups held true even after the researchers accounted for other factors, such as education level and intellectual ability, which can both affect memory performance, Cook told Live Science.

The new study was small; it included 24 SuperAgers and 12 older adults with average cognitive abilities. All of the participants underwent an MRI at the beginning of the study and had a second scan 18 months later, and they were all given a series of tests evaluating their thinking and memory skills at each visit.

SuperAgers are a unique group, and the research team is trying to figure out what factors contribute to these individuals' remarkable memories and their ability to maintain their cognitive skills later in life, Cook said.

For now, researchers are gathering evidence to characterize the similarities and differences between SuperAgers and their age-matched peers, Cook said. Later, the scientists hope to discover the reasons behind these differences, including why the brain volumes of SuperAgers decline at a slower rate, she said. [10 Ways to Keep Your Mind Sharp]

The term "SuperAgers" was first used about five years ago by Northwestern's Emily Rogalski, a senior author of the new study. Between 5 percent and 10 percent of the older adults who have signed up to participate in these studies of SuperAgers met the researchers' qualifications, Cook said.

For example, one of the criterion to qualify as a SuperAger is to remember at least 9 items from a list of 15 words when asked to name the items on the list 20 minutes after first learning them. The average score on this test for people ages 80 and older is six; in the new study, SuperAgers remembered about 11 out of 15 items, on average, the study said.

The reasons SuperAgers have maintained such sharp memory skills are unclear, the researchers said.

"SuperAgers tend to be a socially active and engaged group," Cook said. But researchers don't yet know whether SuperAgers' lifestyle habits — such as diet, exercise, alcohol intake and smoking history — contribute to these individuals' memory skills, she said. And scientists don't know what role genetics or other factors play in helping to maintain SuperAgers' brain health later in life, Cook said.

By revealing why the brains of SuperAgers perform at such a high level, the researchers hope that studies of this small group of older adults will help unlock some of the mysteries of Alzheimer's disease and healthy aging, Cook said.