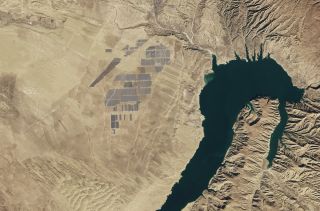 On the Tibetan Plateau in eastern China, 4 million solar panels silently soak up the sun as part of the Longyangxia Dam Solar Park. It’s the largest solar farm in the world, spreading over 10 square miles of the high desert landscape.

The complex sprung into existence in 2013 and has been rapidly expanding ever since. Satellite imagery curated by NASA’s Earth Observatory chronicles its growth from a cluster of panels to a sprawling solar farm that looks like a giant, angular thought bubble as of January 2017.

Unlike the world’s largest ball of twine, it’s more than just a roadside attraction. The installation currently has the capacity to generate 850 megawatts of electricity, or enough to power roughly 140,000 U.S. homes.

The Longyangxia Dam Solar Park is one piece of the massive renewable energy revolution taking place in China. The country invested $103 billion into renewables in 2015, the last year with data available. That helped the world set arenewable investment high water mark of $286 billion.

According to Greenpeace’s Energydesk, preliminary 2016 data show China installed the equivalent of one and a half soccer fields of solar panels every hour. That puts the country on track to meet its 2020 renewable goals sometime in 2018.

The renewables targets line up with China’s international climate commitments. The government previously announced it would lower the carbon intensity of its economy 40-45 percent below 2005 levels. Under the Paris Agreement, China has pledged to peak its carbon dioxide emissions by 2030.

Looking ahead, the government announced in early January that it plans to spend $361 billion on renewable power generation from now through 2020. The influx of cash is expected to help China produce a total of 110 gigawatts of solar power and 210 gigawatts of wind power by 2020.

The increase in investment coincides with a 40 percent drop in the cost of installing utility-scale solar in China since 2010. Solar is expected to become even cheaper in the coming years, further creating more bang for China’s buck (or yuan as the case may be).

Despite the growth in capacity, China has struggled to balance demand and production. An economic slowdown has caused some solar and wind farms to sit idle or produce energy that can’t be used. Local governments and strong coal interests also present obstacles to China’s transition from the world’s biggest carbon polluter to an economy largely powered by clean energy.

China continues to see its emissions rise due largely to heavy coal use, which will increase the risks associated with climate change. The Longyangxia Dam Solar Park is a step toward ensuring China has the capacity to change that.

You May Also Like: Scientists Foresee Losses as Cities Fight Beach Erosion California Farmers Use Floodwater to Replenish Aquifers This January Was the Third Warmest on Record Globally Antarctica Just Shed a Manhattan-Sized Chunk of Ice