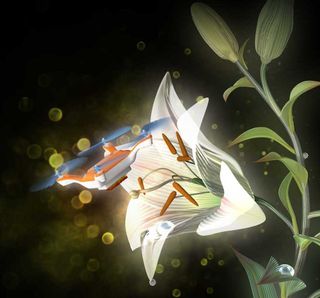 This illustration shows a tiny drone equipped with horsehair and coated with a gel that could be used to pollinate flowers.
(Image: © Eijiro Miyako)

Mini drones sporting horsehair coated in a sticky gel could one day take the pressure off beleaguered bee populations by transporting pollen from plant to plant, researchers said.

Roughly three-quarters of the world’s flowering plants and about 35 percent of the world's food crops depend on animals to pollinate them, according to the U.S. Department of Agriculture.

Some of nature's most prolific pollinators are bees, but bee populations are declining around the world, and last month, the U.S. Fish and Wildlife Service listed a native species as endangered for the first time. [No Creepy Crawlies Here: Gallery of the Cutest Bugs]

Now, researchers from Japan said they've taken the first steps toward creating robots that could help pick up the slack from insect pollinators. The scientists created a sticky gel that lets a $100 matchbox-size drone pick up pollen from one flower and deposit it onto another to help the plants reproduce.

"This is a proof of concept — there's nothing compared to this. It's a totally first-time demonstration," said study leader Eijiro Miyako, a chemist at the National Institute of Advanced Industrial Science in Tsukuba, Japan. "Some robots are expected to be used for experiments in pollination, but no one has tried yet."

The key innovation of the new study, published today (Feb. 9) in the journal Chem, is the so-called ionic liquid gel, but according to Miyako it was more down to luck than design. The gel was actually the result of a failed attempt to create electrically conducting liquids and had sat forgotten in a desk drawer for nearly a decade.

But after eight years, it still hadn't dried out, which most other gels would have done, and was still very sticky, Miyako said. Fortunately, this discovery coincided with Miyako watching a documentary that detailed concerns about insect pollinators.

"I actually dropped the gel on the floor and I noticed it absorbed a lot of dust, and everything linked together in my mind," he told Live Science.

The gel has just the right stickiness, meaning it can pick up pollen but is not so adhesive that it won't let the grains go.

The scientists next tested how effectively the gel could be used to transport pollen among flowers. To do so, the researchers put droplets of the material on the back of ants and left the insects overnight in a box full of tulips. The next day, the scientists found that the ants with the gel had picked up far more pollen grains than those insects that lacked the sticky substance.

In a side experiment, the researchers found that it was possible to integrate photochromic compounds, which change color when exposed to UV or white light, into the gel. Scientists stuck this material onto living flies, giving the bugs color-changing capabilities. This, Miyako said, could ultimately act as some kind of adaptive camouflage to protect pollinators from predators.

But while improving the ability of other insects to pollinate flowers is a potential solution to falling bee numbers, Miyako said he was not convinced, and so began to look elsewhere. "It's very difficult using living organisms for real practical realizations, so I decided to change my approach and use robots," he said.

The hairs that make insects like bees fuzzy are important for their role as pollinators, because the hairs increase the surface area of the bees' bodies, giving pollen more material to stick to. In order to give the smooth, plastic drone similar capabilities, the scientists added a patch of horsehair to the robot's underside, which was then coated with the gel.

The researchers then flew the drones to collect pollen from the flowers of Japanese lilies and transport this pollen to other flowers. In each experiment, the researchers made 100 attempts at pollinating the flower, achieving an overall success rate of 37 percent. Drones without the patch of hair, or with uncoated hair, failed to pollinate the plants.

Miyako said there are currently limitations to the technology, because it is difficult to manually pilot the drone. However, he added that he thinks GPS and artificial intelligence could one day be used to automatically guide robotic pollinators.

Before these robo-bees become a reality, though, the cost of the drone will have to come down drastically and it's 3-minute battery life will need to improve significantly, Miyako said. But he added that he is confident this will happen eventually.

Dave Goulson, a professor at the University of Sussex in the United Kingdom, said he sees the intellectual interest in trying to create robot bees, but he's skeptical  about how practical they are and worries about distracting from more vital pollinator conservation work.Goulson specializes in the conservation of bumblebees but was not involved with the new research.

In a blog post, he wrote that there are roughly 3.2 trillion bees on the planet. Even if the robo-bees cost 1 cent per unit and lasted a year, which he said is a highly optimistic estimate, it would cost $32 billion a year to maintain the population and would litter the countryside with tiny robots.

"Real bees avoid all of these issues; they are self-replicating, self-powering and essentially carbon-neutral," Goulson wrote in the post. "We have wonderfully efficient pollinators already. Let's look after them, not plan for their demise."