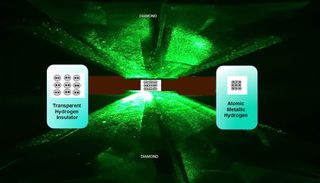 Scientists have just found a way to make metallic solid hydrogen in the lab, by compressing it at ultrahigh pressure between two diamond anvils.
(Image: © Ranga Dias; Isaac Silvera)

Metallic hydrogen, a bizarre form of the element that conducts electricity even at low temperatures, has finally been made in the lab, 80 years after physicists predicted its existence.

Scientists managed to create the elusive, electrically conductive hydrogen by squeezing it to incredibly high pressures between two ultrapure diamonds, the researchers reported in a new study.

In theory, it's possible that metallic hydrogen could be used as an ultralight, extremely powerful rocket fuel, Silvera added. [Interstellar Space Travel: 7 Futuristic Spacecraft to Explore the Cosmos]

In 1935, physicists Eugene Wigner and Hillard Bell Huntington predicted that high pressures of around 25 gigapascals (about 246,000 times atmospheric pressure) could force the normal bonds between solid hydrogen atoms to break down, freeing electrons to move around. In simple terms, the normally transparent material would become shiny and reflective, and have other properties associated with metals. (Technically, the definition of a metal is that it conducts a finite amount of electricity even as you cool it toward the lowest possible temperature, absolute zero, Silvera said.)

Later research found that the pressure needed for this transition was even higher — pressures that are likely found only deep at the core of dense planets.

"There have been dozens of theoretical papers and they all have different critical pressures for when it becomes metallic," Silvera said.

Researchers found ways to produce higher and higher pressures, yet no one could produce the elusive material.

The problem was: What materials on Earth are strong enough to adequately squish hydrogen atoms?

To answer that question, researchers turned to the strongest material on Earth: diamonds. But even diamonds cracked under the exceedingly high pressures needed to convert the material.

So, Silvera and his postdoctoral researcher, Ranga Dias, looked for ways to make their diamonds more robust.

"We designed the system so that all the things that can lead to the breaking of a diamond were not there," Silvera told Live Science.

Normally, researchers use diamonds dug from the Earth, which have tiny inconsistencies in their internal structure. The team decided to create tiny anvils from synthetic diamonds, which can be produced without any of these internal inhomogeneities.

Scientists usually polish these diamonds using a fine powder made of diamonds, but this "can gouge carbon atoms out of the surface and leave defects there," Silvera said.

Like an initial tear in a piece of paper that makes it more vulnerable to ripping the whole way down, these defects can be failure points where diamonds start to crack, Silvera said.

Instead, the scientists used a chemical process to etch away a very thin layer of the surface without gouging it.

Finally, the insanely high pressures required in these experiments sometimes cause hydrogen atoms to diffuse into the diamonds, which can also cause cracking. So, the team coated the diamond anvils with alumina, the same material found in sapphire, which prevented the diffusion.

The whole system was cooled to the temperature of liquid helium, about minus 452 degrees Fahrenheit (minus 269 degrees Celsius), and then the diamond anvils squeezed the tiny sample of solid hydrogen.

As the pressure rose, the normally transparent hydrogen molecules morphed into an opaque color, and then finally became shiny. Follow-up tests confirmed that the material was, indeed metallic. The pressure needed to achieve this transition? 495 gigapascals (71.7 million pounds-per-square inch), or more than the pressure found in Earth's core.

Right now, scientists don't know much about the material's properties. The whole experimental setup is still sitting under high pressure in the lab, waiting for the next tests.

"Our experience is that once you pressurize a set of diamonds to pressures above a million atmospheres, when you release the pressure, the diamonds break," Silvera said.

As such, the team doesn't yet know whether, as theory suggests, the metallic hydrogen is stable even if the pressure is removed.

If the metallic hydrogen maintains its properties even after the high pressure is removed, it's possible it could be used to make a room-temperature superconductor, Silvera said. This could be helpful in producing magnetic-levitating trains or MRI machines that do not require the material to be cooled to liquid helium temperatures.

"It's also predicted to be the most powerful rocket propellant that man knows, So, if one could somehow scale it up and make large quantities of it, it could revolutionize rocketry," Silvera said.

Basically, because it takes so much energy to squish hydrogen into its metallic state, when they recombine into their molecular form (two hydrogen atoms bonded together), they release huge amounts of heat. And because hydrogen is the lightest element, it would be tens of times lighter than existing rocket propellants.

The team wants to follow up on these results by testing whether metallic hydrogen is stable and superconducting at normal temperatures and pressures.

The findings were published today (Jan. 26) in the journal Science.