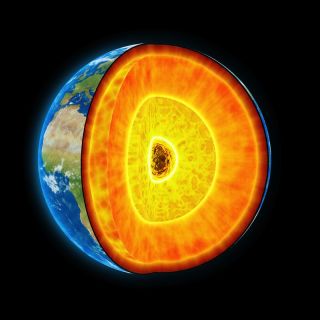 Biblical views of the center of the Earth as a hellish pit raging with fire and brimstone have some support from new research. Scientists have found that the vast majority of brimstone — reverently referred to in biblical times as "burning stone," but now known more commonly as sulfur — dwells deep in the Earth's core.

"In a way, we can also say that we have life imitating art," study lead author Paul Savage, a research scientist in the Department of Earth Sciences at Durham University in the United Kingdom, said in a statement."For millennia, tales have been told of the underworld being awash with fire and brimstone. Now at least, we can be sure of the brimstone."

The researchers estimate that the Earth's core contains 10 times the amount of sulfur than in the rest of the world, or comparable to about 10 percent of the mass of the moon. [Religion and Science: 6 Visions of Earth's Core]

Scientists have generally understood that at the time of Earth's formation, heavy metals such as iron and nickel sunk to the planet's core, and light elements, like oxygen, silicon, aluminum, potassium, sodium, and calcium, mostly concentrated in the outer layers of the Earth, in the mantle and crust.

However, the mass of the Earth's solid inner core, which is too light to be composed solely of metal, has been an enduring inconsistency in our understanding of the planet's distribution of elements. To explain the core's lighter-than-expected weight, scientists assumed that the core had to contain some lighter elements, such as oxygen, carbon, silicon and sulfur.

"Scientists have suspected that there is sulphur in the core for some time, but this is the first time we have solid geochemical evidence to support the idea," Savage said.

Confirming the presence of lighter elements, like sulfur, in the core, provides information about the temperatures, pressures and oxygen content in the Earth's mantle, which surrounds the core and separates it from the crust on which we walk. "It'd be nice to know what the Earth is formed of, as a fundamental aspect of understanding the Earth," Savage told Live Science.

Peeling back the layers

Without the technology to dig 1,800 miles (2,900 kilometers, or the equivalent of around 3,000 Eiffel Towers stacked on top of one another), scientists looked for clues created by a 4.47 billion-year-old impact— the moon-forming collision between Earth and a large, planet-size body called Theia.

"The giant impact wouldn't have just formed the moon; it wouldn't have just sort of sliced a bit of material off and end up becoming the moon," Savage said. "The amount of energy involved in this sort of impact would have, if not completely, it would have partially melted the Earth's mantle to a certain depth." When the mantle melted, some of its sulfur-rich liquid seeped into the core, and some of it evaporated into space, he added.

"You could lose a lot of it during evaporation," Savage said. "Just by looking at the sulfur, we can't really tell much about how much is in the core versus how much has been lost to space," making sulfur virtually impossible to directly measure. [Photo Timeline: How the Earth Formed]

To track and quantify the elusive sulfur, the researchers looked to copper isotopes (atoms of the same element with different numbers of neutrons). "We chose copper, because it is a chalcophile element, which means it prefers to be in sulphide-rich material — so it is a good element to trace the fate of sulphur on Earth," Frédéric Moynier, the study's senior author and a professor at the Institut de Physique du Globe in Paris, said in a statement. "Generally, where there is copper, there is sulphur; copper gives us a proxy measurement for sulphur."

The researchers measured the copper isotope values from both the mantle and core to discover where they would find sulfur. Meteorites were used to represent the "bulk Earth," which includes the core, mantle and crust. Meteorites are jumbles of extraterrestrial matter that have been orbiting the sun since even before planets formed. "They're like cosmic sediments," Savage said. "If we got a planet and milled it down, if we sort of crushed it up and mixed it around, that's what we assume would be in meteorites."

The scientists measured a heavy "bulk silicate Earth" copper isotope value compared with the "bulk Earth" value, which could indicate that the mantle has a lot of heavy copper and the core does not. However, through experiments, they found that the "copper in the core should be slightly heavy compared to the mantle — so the core cannot balance out the heavy mantle compared to meteorites, because it is also heavy," Savage said. If there are a lot of heavy copper isotopes in one part of the Earth, another part will have a lot of light copper isotopes.

To explain copper's "heaviness" in both the mantle and core, the researchers predicted that a sulfur-rich liquid with "light" copper formed after the impact that created the moon. "So the [melted mantle] is light, the mantle is heavy, and the two, when mixed together, would equal bulk Earth (meteorites)," Savage said.

After the Earth formed from meteorites and other extraterrestrial matter like dust and rock, it started to melt, forming its core. During core formation, some "heavy" copper left the melting mantle and entered the core, leaving the mantle with "lighter" copper, Savage said. Then, following the giant moon-forming impact, the Earth's mantle re-melted, forming a sulfur-rich liquid. "Light" copper attached itself to the liquid, leaving the mantle with the "heavier" copper, reflected in the compositions measured in present-day lava and rocks, the researchers said.

"This study is the first to show clear geochemical evidence that a sulphide liquid must have separated from the mantle early on in Earth's history — which most likely entered the core," Savage said.

The researchers detailed their findings yesterday (June 16) in the journal Geochemical Perspectives Letters.

Editor's Note: This story was updated to reflect the accurate number of Eiffel Towers it would take to get to the Earth's core.