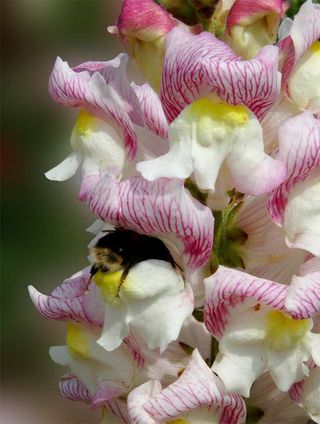 Bees like this one are the main pollinators of snapdragon flowers, as the insect is able to open up the petals and get inside where the nectar and pollen reside.
(Image: © John Innes Centre.)

Snapdragon flowers sport landing strips of sorts that help guide bumblebees to their petals, where the insects can help with pollination, new research shows.

To keep a garden buzzing with these pollinators, the researchers suggest planting the striped variety flowers over plain white.

"Stripes following the veins of flowers are one of the most common floral pigmentation patterns so we thought there must be some advantage for pollination," said Cathie Martin of the John Innes Center in the United Kingdom, an independent research organization.

The team spent successive summers watching the foraging patterns of bumblebees on snapdragon plants grown in Norwich. Tallies suggested red flowers and those with stripes along the petal veins were visited significantly more often, with more flowers visited per plant, than the white or pink flowers.

Bumblebees are the main pollinators for snapdragon, as this insect is able to open up the closed flower to pick up nectar and pollen. Often pollinators memorize floral signals, such as shape, scent, color and patterns, in order to return to flowers where nectar is plentiful, the researchers explained.

And simple changes in a single gene can have dramatic effects on flower features, and in turn, which pollinators visit the plants, according to the scientists.

The team found that two genetic signals interact to create the striped pattern along the flowers' veins.

"We found that one signal comes from the veins of the petals and one from the skin of the petals, the epidermis. Where these signals intersect, the production of red anthocyanin pigments is induced," said study author Kathy Schwinn from the New Zealand Institute for Plant & Food Research.

The genes responsible seem to have been around for a while. "We examined the origin of this trait and found that it has been retained through snapdragon ancestry. The selection pressure for this trait is only relaxed when full red pigmentation evolves in a species," Martin said.

The research is detailed in the October issue of the journal New Phytologist.