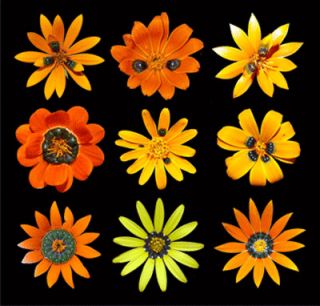 Most plants offer an honest deal to the insects that would pollinate them: nutritious nectar and pollen in exchange for gamete-dispersal services. A South African daisy, however, has been caught playing a seductive trick: It beguiles male flies into trying to mate with special spots on its petals, sprinkling the flies with pollen in the heat of the moment.

This finding by two ecologists in South Africa makes the daisy the only "sexually deceptive" plant known outside of orchids.

The beetle daisy, Gorteria diffusa, is a charismatic inhabitant of South African shrublands, swathing the landscape in bright orange each spring. The plants have curious black spots on their petals that bear an uncanny resemblance to their main pollinator, the bee-ﬂy Megapalpus capensis. The spots are fuzzy and raised, with coloration that mimics light glinting off a bee-fly's wings and midsection.

In 1997 Steven Johnson and a colleague reported that male bee-flies were strongly attracted to these spots, and they suggested the bee-flies might have been seeking mates. But the pair stopped short of declaring a case of sexual deception — in large part because they never observed actual fly-on-flower fornication.

In the new study, Johnson, now at the University of KwaZulu-Natal, teamed up with Allan Ellis, of the University of Stellenbosch, to observe bee-flies pollinating beetle daisies in the wild and in experimental cages.

They found male bee-flies would buzz down on a petal spot and attempt to copulate, thrusting their little abdomens back and forth and spinning around, just as they do when they mate with a female bee-fly.

Not all beetle daisies had the same sex appeal. Last year, after meticulously mapping beetle-daisy populations, Ellis and Johnson reported the species' spots are much more variable than anybody realized, with 14 distinct spot patterns corresponding to different geographic areas. In the latest study, the pair compared the bee-flies' responses with several of these flower forms.

The flower forms that drove male bee-flies the wildest had a few raised spots scattered on the petals, perhaps appearing to be flies milling about at random. Daisies covered with flat spots arranged in a full ring elicited little or no sexual behavior. Bee-flies would eat some nectar or pollen and the males might inspect the spots, but they certainly weren't duped into making any untoward advances.

That explains why the unusual liaison had gone unnoticed. "The floral form that the initial work was done on does elicit a mating response, but it's not a very strong one. There are other forms out there that elicit a much more intense copulation response," Ellis said.

Ellis and Johnson also checked whether the daisy's sexy trick actually results in pollination. They sprinkled fluorescent powder on the pollen dispensers of deceptive and non-deceptive beetle daisies, and tracked how effectively the bee-flies distributed it to other flowers. Sure enough, male bee-flies attempting to copulate with the spots transferred pollen and were much more effective pollinators on the deceptive form than on the non-deceptive one.

The difference in pollination effectiveness had to do with mechanics, the researchers found. For deceptive daisies, "the spots are actually raised in such a way that the mating fly is positioned amongst those pollen presenters," Ellis said. "Whereas in the non-sexually-deceptive forms, the spots are actually flat on the red floret, and the fly sitting on the spot doesn't necessarily contact the pollen."

More to the story

The findings contradict a widely accepted theory that plants evolve new flower variations only when they switch from one pollinator to another. Instead, the beetle daisy has a continuum of flower forms that all appeal to a single main pollinator. (Ultimately, Ellis said, the beetle daisy may be broken up into several species.)

In the end, as subtle as the daisy's seduction of the bee-fly may be, the pollinator remains just a go-between in a larger sexual drama: the union of two flowers.

The paper is to be published in the November issue of the journal American Naturalist.