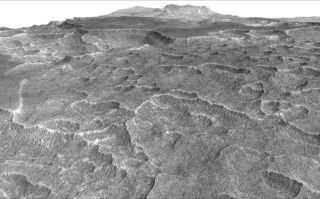 A giant deposit of buried ice on Mars contains about as much water as Lake Superior does here on Earth, a new study reports.

The ice layer, which spans a greater area than the state of New Mexico, lies in Mars' mid-northern latitudes and is covered by just 3 feet to 33 feet (1 to 10 meters) of soil. It therefore represents a vast possible resource for future astronauts exploring the Red Planet, study team members said.

"This deposit is probably more accessible than most water ice on Mars, because it is at a relatively low latitude and it lies in a flat, smooth area where landing a spacecraft would be easier than at some of the other areas with buried ice," co-author Jack Holt, of the University of Texas, Austin, said in a statement. [Photos: The Search for Water on Mars]

The researchers, led by Cassie Stuurman of the Institute for Geophysics at the University of Texas, analyzed observations of Mars' Utopia Planitia region made by the ground-penetrating Shallow Radar (SHARAD) instrument aboard NASA's Mars Reconnaissance Orbiter. They focused on this area because Utopia Planitia features "scalloped depressions" similar to landscapes in the Canadian Arctic that lie atop buried ice.

Data gathered by SHARAD during 600 MRO passes over Utopia Planitia revealed the deposit between 39 and 49 degrees north latitude. The layer ranges in thickness from 260 feet to 560 feet (80 to 170 m) and is made up of 50 to 85 percent water ice, researchers said. (The remainder is dirt and rock.)

That puts the deposit's water volume roughly on a par with that of Lake Superior, the largest of the Great Lakes, which holds 2,900 cubic miles (12,090 cubic kilometers) of the wet stuff.

SHARAD is capable of distinguishing between layers of liquid and frozen water, and the instrument's data indicate that all of the Utopia Planitia water is ice at the moment. That's bad news for anyone hoping to find evidence of Mars life, because life here on Earth is intimately tied to liquid water.

But there may have been some melting in the past, during times when Mars' poles were tilted at a different angle, researchers said. The planet has a 25-degree lean at the moment, but this axial tilt varies to about 50 degrees over a 120,000-year cycle.

Indeed, the ice deposit probably formed during a high-tilt era, when snow accumulated at middle Martian latitudes rather than at the poles as it does now, Stuurman said. So further study of the Utopia Planitia ice deposit could also shed light on how the Martian climate has changed over the ages.

"The ice deposits in Utopia Planitia aren't just an exploration resource, they're also one of the most accessible climate change records on Mars," co-author Joe Levy, also of the University of Texas, said in the same statement.

"We don't understand fully why ice has built up in some areas of the Martian surface and not in others," Levy added. "Sampling and using this ice with a future mission could help keep astronauts alive, while also helping them unlock the secrets of Martian ice ages."

The new study was published in the journal Geophysical Research Letters.