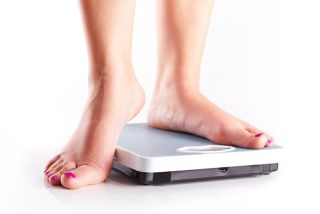 Women whose weight fluctuates by more than 10 lbs. (4.5 kilograms) over the course of a decade, but who are not overweight, may have an increased risk of heart problems, a new study finds.

In the study, researchers looked at data from nearly 160,000 postmenopausal women who took part in the Women's Health Initiative (WHI), a large study that began in 1991 and is aimed at looking at the major health problems women face after menopause. The scientists found that among the women whose weight was within the normal range, weight fluctuations of more than 10 lbs. were associated with a 66 percent increase in the risk of dying from coronary heart disease over an 11-year period, compared with the women who had weight fluctuations of less than 10 lbs. Coronary heart disease is a condition in which substances such as fat block the blood vessels to the heart, decreasing blood flow to the organ.

Interestingly, the association between weight fluctuations and heart problems was found only in women with weights in the normal range, and not in women who were overweight or obese, the researchers said. The study's findings were presented at the American Heart Association's Scientific Sessions 2016. [Wonder Woman: 10 Interesting Facts About the Female Body]

"These findings were actually similar to what is known in the medical literature as the obesity paradox," Dr. Somwail Rasla, the study's lead author and an internal medicine resident at Brown University in Rhode Island, told Live Science. This term refers to the idea that people who are obese can seem just as healthy or even healthier, by certain measures, than those whose weight is within the normal range, a phenomenon that researchers are still investigating.

This research is the first long-term study to show an association between weight fluctuations and sudden cardiac death, the researchers said.

The women in the study ranged in age from 50 to 79 at the study's start. Over the course of the study, about 55,000 of the participants had weight fluctuations of greater than 10 lbs. Also during the study, 2,526 of the women died from coronary heart disease.

The researchers' further analysis showed that the greater the frequency of the women's weight fluctuations, the higher was their risk for heart problems, Rasla told Live Science. In contrast, neither steady weight gain nor steady weight loss was associated with an increased risk of dying from coronary heart disease.

The takeaway, Rasla said, is that having a stable, healthy weight is better for your heart than having a fluctuating normal weight caused by yo-yo dieting. However, people who are overweight or obese should still be encouraged to lose weight in order to decrease their risk of diabetes and high blood pressure, he said. [The Best Way to Lose Weight Safely]

The study had a couple limitations, Rasla said. It relied on women's reports of their own weight fluctuations, which could be inaccurate, he noted. The study was also limited to postmenopausal women, so more research would need to be done in order to determine if the effects also occur in younger women, or in men, Rasla said.