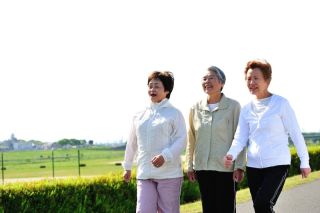 Your fitness tracker may nag you to reach "10,000 steps a day," but if you can't meet this goal, don't give up hope — a new study finds that taking fewer steps may still bring health benefits, especially if you walk at a brisk pace.

In the study, researchers analyzed information from about 3,400 U.S. adults who took part in a national health survey in which they were asked to wear a fitness-tracker-like device, called an accelerometer, for up to a week. The devices kept track of the users' daily steps, as well as their pace (steps per minute). Researchers also assessed participants on a number of health measures that affect a person's risk of chronic diseases, such as waist circumference, body mass index, blood pressure, fasting glucose, insulin and cholesterol levels.

But overall, the more steps people took, the better those individuals fared in health measures. Even participants who took only about 5,000 to 7,000 steps a day "still displayed favorable values" for these disease risk factors, the researchers said. [The Truth About '10,000 Steps' a Day]

"Some physical activity is better than none, and typically more is better than less," study co-author John Schuna Jr., an assistant professor of kinesiology in Oregon State University's College of Public Health and Human Sciences, said in a statement.

The researchers also calculated something called the "peak 30-minute cadence," which is the average number of steps in a participant's most vigorous 30 minutes each day (which weren't necessarily consecutive minutes). Generally, researchers recommend that people engage in 30 minutes of "moderate intensity" physical activity every day, with 100 steps per minute being the minimum for moderate intensity.

However, people who took about 70 to 80 steps per minute during their peak cadence also had favorable values for their health measures, the researchers said.

The findings suggest that "small increases in the volume (steps/day) and intensity (peak 30-min cadence expressed in steps/min) of physical activity across the day … are associated with clinically favorable values for a wide range of cardiometabolic risk factors," the researchers wrote in their paper, published online Sept. 23 in the journal Medicine & Science in Sports & Exercise.

That's not to say you shouldn't aim to take 10,000 steps a day if you can. Meeting this goal will put you in the top 15 percent of adults for step count, Schuna said. People should aim to take at least 3,000 of their daily steps at a brisk pace, he said.

The researchers noted that their study was conducted at a single point in time, so they don't know for sure whether the step count and pace of the participants was indeed the cause of their high or low disease risk factors. More research would be needed to see how changing step count influences health, the researchers said.