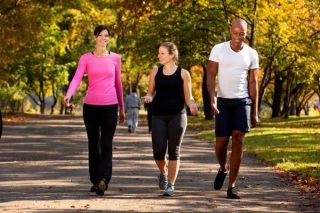 If you buy a smart pedometer or fitness tracker like a Fitbit, chances are the device will encourage you to take 10,000 steps a day. But do you really have to walk this much to be healthy?

Experts say that while 10,000 steps a day is a good number to reach, any amount of activity beyond what you're currently doing will likely benefit your health.

The origins of the 10,000-steps recommendation aren't exactly scientific. Pedometers sold in Japan in the 1960s were marketed under the name "manpo-kei," which translates to "10,000 steps meter," said Catrine Tudor-Locke, director of the Walking Behavior Laboratory at Pennington Biomedical Research Center in Baton Rouge, La. The idea resonated with people, and gained popularity with Japanese walking groups, Tudor-Locke said. [The Best Pedometers of 2014]

Studies conducted since then suggest that people who increased their walking to 10,000 steps daily experience health benefits.

Walking 10,000 steps a day is not an official recommendation from the Centers for Disease Control and Prevention. Instead, the agency recommends adults engage in 150 minutes of moderate activity a week, such as brisk walking. To meet the CDC's recommendation, you need to walk about 7,000 to 8,000 steps a day, Tudor-Locke said.

If you normally walk about 5,000 steps a day, getting in an extra 30-minute, brisk walk into your day would take you to about 8,000 steps, Tudor-Locke said. The average U.S. adult walks about 5,900 steps daily, she said.

Still, there's no reason to stop at 8,000 steps if you can do more, Tudor-Locke told Live Science. "We do know that more is better."

The Mayo Clinic recommends that people using pedometers first set short-term goals, such as taking an extra 1,000 steps daily for one week, and then build up to a long-term goal such as 10,000 steps.

Tudor-Locke said that there's not a single strategy to increase your step count, each person has to find what works for them. The most important thing is to increase your activity beyond what you were doing before.

Dr. Clay Marsh, chief innovation officer at Ohio State University Wexner Medical Center, agreed, and said that people don't need to feel like they have to achieve 10,000 steps to be active.

"We just want people to get up, and get started," Marsh told Live Science in an interview in February. "Any amount of activity that you can do today that you didn’t do yesterday, you're probably going to start benefiting from it."