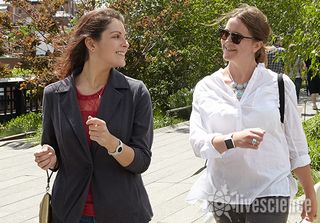 The Jawbone UP Move and the Garmin Vivoactive are two of our top picks for step-counting devices.
(Image: © © Jeremy Lips / LiveScience.com)

We recently reviewed nearly two dozen fitness trackers, sports watches, pedometers and smartphone apps to find the best devices for counting steps. After careful research and hands-on testing, we recommend the Jawbone UP Move as the overall best (and most accurate) step-counting wearable device. If you'd like to use your smartphone to count your steps, we recommend Argus, a free health- and fitness-tracking app for Android and iOS.

To find the best devices for counting steps, we collected the fitness trackers and watches with the highest ratings on Live Science. We also reviewed the top-selling fitness trackers on Amazon and the highest-rated pedometer apps for Android, iOS and Pebble (a popular smartwatch).

To assess this batch of 23 devices and apps, we performed multiple indoor and outdoor trials. All of the devices and apps were tested for accuracy while we ran and walked at different paces, on both a treadmill and an unpaved running trail. The wrist-worn devices were also put to the test as we typed and brushed our teeth (two activities that some devices mistake for walking). We then calculated the average accuracy per 100 steps for each device and app, and used this data — as well as information about overall design, user-friendliness and value — to choose our top picks.

Jawbone UP Move
Amazon
$18.39
View
We check over 130 million products every day for the best prices
View All Deals

[Read full review of the Jawbone UP Move]

At just $30, the Jawbone UP Move is an affordable, feature-rich fitness tracker that is very good at counting steps. The device can either be worn as a bracelet or clipped onto your clothing. I found the device was more precise at counting my steps when it was clipped onto a waistband or the front pocket of a pair of pants. Wearing it close to the hip like this also decreased the number of "false" steps that the tracker counted (for instance, when the device was clipped to my pants, it didn't count typing or other arm gestures as steps, unlike when I wore the tracker on my wrist).

The UP Move was one of several fitness trackers I tested that can be worn as a bracelet or on your hip. The Misfit Flash and the Withings Pulse O2 can also be worn both ways, but the Flash had a few design issues (it kept falling out of the wristband and the clip). And though the Pulse O2 had a convenient display screen that lets you view the number of steps you've taken, I found it almost impossible to read the display in direct sunlight.

The UP Move doesn't have a display screen. To see how many steps you've taken, you need to download Jawbone's mobile app and pair the tracker with your device via Bluetooth. In the app, you'll also be able to see an estimate of your total distance traveled and calories burned, as well as details about how long you spent being active (and inactive) during the day and how long you slept at night. [The Truth About 10,000 Steps a Day]

If you'd rather have a smart device with a screen for displaying your step count, then we recommend the Fitbit Zip. You can clip this tiny (but easy-to-read) tracker onto your hip to track steps, distance and calories burned. And like the UP Move, the Zip uses a coin battery that you can change yourself, so you'll never need to charge it. But unlike the UP Move, the Zip can't be worn on your wrist, and it doesn't track sleep.

[Read more about Argus and other recommended fitness apps]

Argus is a well-designed app that can help you keep track of just about every aspect of your daily activity. I tested the Argus app on an Android smartphone (a Motorola Moto G) and an iPhone 6, and found it was accurate at counting steps when I tucked the phones into the waistband of my pants or into a back pocket. In fact, Argus was just as accurate at counting steps as the CSX Walking 3D Pedometer and the Fitbit Zip (two of the most accurate clip-on pedometers we tested.) [Wearables vs. Smartphone Apps: Which Are Better to Count Steps]

The app is designed to help people track weight, meals, heart rate and daily activity, making it a great option for people who want a broad overview of their general health and fitness. But the app is also simple enough that, if you really just want to track your steps, you can easily do that without getting overwhelmed by other data. One of my favorite features of this app is that I could just glance at my phone to see how many steps I had taken, without actually having to open up the app. On Android phones, Argus displays your step count on the lock screen. On iPhone devices, steps are displayed in the upper right-hand corner of the app icon on your home screen.

Though Argus is our top pick, if you're looking for a pedometer app without so many bells and whistles, then we recommend the Pacer app. Available for both Android and iOS, Pacer accurately tracks steps — as well as distance, calories burned and active minutes — and is simple to navigate. Like Argus, the app uses your phone's GPS to map the route of walks or runs, and you can share data you collect using Pacer (and Argus) with popular third-party apps, such as MyFitnessPal and Apple Health.

Both Argus and Pacer let you input your body weight, but only Argus syncs with select Bluetooth-enabled scales to wirelessly upload weight and body-fat data every time you weigh in. However, if you're keeping track of steps because you want to lose weight, then you might consider using Lose It as your pedometer app. The Lose It app (available for Android and iOS) syncs with a wide range of Bluetooth-compatible smart scales and makes it easy to set weight-loss goals and keep track of exactly what (and how much) you're eating. The app is also accurate at counting steps. [The Best Smart Scales]

If you have a Pebble smartwatch, then we recommend using the Misfit app for Pebble to track your steps. I tested several pedometer apps for this popular smartwatch, including Moveable and Pedometer, but only the Misfit app was accurate at counting steps. It was also the only pedometer app I tested on the Pebble that didn't mistake times when I was typing and brushing my teeth for steps.

Garmin Vivoactive
Walmart
$135.21
View
We check over 130 million products every day for the best prices
View All Deals

I tested several devices that can second as everyday timepieces, but the Garmin Vivoactive was the most accurate at counting steps. This fitness watch (which also happens to be our top pick for best GPS watch) keeps track of your daily activity and nightly sleep patterns. The watch is GPS-enabled, which means you can use it to accurately track distance, speed and pace for running, walking and cycling.

The Vivoactive also tracks swimming and golf, and can be paired with a heart-rate strap to monitor your pulse as you exercise. But if you'd rather leave the heart-rate strap at home, you might want to consider the Basis Peak, the Fitbit Charge HR or the Fitbit Surge. All of these devices track steps and have built-in heart-rate sensors; however, each one has issues that put it out of the running for top pick.

The Fitbit Surge, for example, tends to tally footfalls correctly during a run, but it consistently underestimated my step count on walks. And the Basis Peak is accurate when used as a pedometer, but it doesn't display total distance traveled, which is an essential feature for a pedometer. Finally, the Charge HR was accurate when it came to tracking steps, but it also tended to mistake other movements (such as typing) for footsteps.

If you're searching for the simplest and most accurate pedometer for an affordable price, then a pocket pedometer might be a good option. These lightweight step-trackers do have one serious drawback for tech-savvy consumers: They can't transfer the data they collect to your mobile device. But the pedometers typically store from 7 to 30 days' worth of activity data internally. And all of the devices I tested had bright, easy-to-read display screens, which made it simple to see at a glance how many steps I had taken. (This sets them apart from our top pick, the Jawbone UP Move, which doesn't have a display screen.)

I tested five of the best-selling pocket pedometers on the market and found that the Ozeri 4x3 Sport was both highly accurate and user-friendly. This thin pedometer comes with a durable clip that you can attach to the waistband of your pants. As with most conventional pedometers, you'll need to figure out your stride length to get the most accurate distance readings from the device (otherwise the pedometer will assign you a stride length based on your height). The instruction manual for the 4x3 Sport explains how to measure your stride length (you'll need a tape measure and a calculator), as well as how to set the time and date on the device. In all, setting up this tracker took me about 10 minutes.

I also tested the CSX Walking 3D Pedometer and found that this device was slightly more accurate than the Ozeri 4x3 at counting steps, especially during runs. However, the CSX device was difficult to read in direct sunlight, and I found I didn't accidentally hit buttons on the Ozeri pedometer as much while wearing it as I did on the CSX pedometer.

One of the pedometers I tested, the Striiv Smart, can be connected to a computer to transfer data. However, this device felt more like a handheld video game than a step tracker, with steps earning you points in the pedometer's many built-in games and challenges. While this approach may be a great option for those who find friendly competition motivational (or for kids), it seemed overkill to me. And for $53, you can get a step-counting fitness tracker that pairs with your mobile device, which the Striiv Smart cannot do.