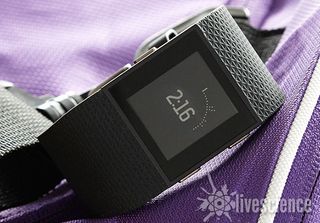 The Fitbit Surge is a fitness tracker that monitors your steps taken, distance traveled, calories burned, floors climbed and sleep quality. But the Surge offers three advanced features that are not found on most fitness trackers: the device is GPS-enabled, so you can use it to map outdoor exercises like running and hiking, it includes a built-in heart rate monitor, and offers continuous heart rate monitoring, and it even includes some smartwatch features — you can view texts and incoming calls to your phone right on your wrist.

At $250, the Surge is at the high end of the price range of fitness trackers, and costs $100 more than the Charge HR, another Fitbit device that also offers continuous heart rate monitoring. But unlike the Charge HR, the Surge's GPS feature puts it on par with GPS watches like the TomTom Multi-Sport Cardio, which also goes for $250, on Amazon.

I recently wore the Surge day and night for a week to see how well it performed as both an activity tracker and a sports watch. Here's how it went.

With a built-in heart rate sensor and GPS tracking, the Surge is one of the most comprehensive fitness trackers on the market. The watch is easy to use and its accompanying app is simple to navigate.

However, the Surge is bulky and uncomfortable to wear (especially while sleeping). It's not waterproof, so you can't use it to track swim workouts. And as of this writing, the Surge doesn't track outdoor cycling either.

The first thing I noticed about the Surge was its size. It's certainly not as big as some of the GPS watches I've tested, like the Suunto Ambit3 Sport, a multisport GPS watch that measures just under 2 inches (50 millimeters) across. But at 1.34 inches (34 mm) wide, it's quite a bit bigger than the average fitness band. The Fitbit Charge, for example, is just 0.84-inches (22 mm) wide.

The Surge is made of a soft rubbery plastic and comes in three colors (blue, tangerine orange and black). While this watch was easy to put on and take off, I wasn't comfortable wearing it all day. Its boxy shape (the face is rectangular, not circular like conventional watches) didn't sit well on my wrist, and made the Surge particularly uncomfortable to wear while typing on my laptop or trying to fall asleep. This could be a problem for people who want to use the device's sleep-tracking features.

The Surge isn't waterproof, according to the Fitbit website, which states that the device is "sweat, rain and splash proof." Therefore, you need to remove the watch before showering or swimming. To be on the safe side, I even removed it when doing dishes in the sink. In contrast, the similarly priced TomTom Multi-Sport Cardio also offers GPS capabilities and can be fully submerged. [Best Fitness Trackers for Swimmers: 2015 Guide]

The watch has a battery life of up to seven days, according to Fitbit. However, I found that with everyday use and a daily hour-long workout using the GPS-tracking feature, the Surge needed to be charged every three days or so. That's better than the two days of battery life you'll get with the Microsoft Band, which also has built-in GPS and an optical heart rate sensor, but it still felt like a lot of charging to me.

Unlike most GPS watches I've tested, the Surge has a touch-screen display. You can scroll through the home screen with your finger to see your daily activity metrics (like your number of steps taken and calories burned), or you can press a button to get to other screens, like the exercise menu or a screen that lets you set an alarm. The three buttons on this device are easy to press, and I really liked this combination of built-in buttons and touch-screen capabilities because it made the Surge very easy to navigate.

Setting up the Surge was also easy. You need to plug in the wireless dongle that comes with the Surge and download Fitbit's Connect software if you want to set up the watch on your computer. If you're using a mobile device, you can download the Fitbit app to get started. If you don't already have a Fitbit account, you'll be prompted to create one before using the watch. I used the Fitbit app and was pleasantly surprised to find that, during the setup process, the app provided helpful bits of information, including cleaning instructions for the Surge and directions on how to position the watch on your wrist in order to collect accurate heart rate data.

The Fitbit app is very simple to navigate and, once opened, quickly syncs with the tracker. On the app's main menu, or dashboard, you can see all your totals for the day (i.e., total steps taken or calories burned) listed as widgets that you press to see more in-depth data. You can also scroll through the app to see your data for previous days. [Best Fitness Apps for 2015]

One of the only problems I had while using the Surge had to do with charging the device. The tracker comes with a charging cable that you can plug into the USB port of a computer or a wall outlet (with a USB-to-wall adaptor, sold separately), and the other end plugs into a port on the underside of the Surge. But I found that the charger easily became disconnected from the port on the tracker. Twice during my week of testing, I thought I had left the Surge to charge overnight only to find that the cable had somehow disconnected from the tracker, and it hadn't charged.

With its built-in heart rate sensor and GPS features, the Surge is one of the most comprehensive fitness trackers on the market. And Fitbit has done a fairly good job of helping users make sense of all the extra data that the Surge tracks. In the "account" section of the app, you can read about heart rate zones, or the number of heartbeats per minute you should strive for to reach different fitness goals (i.e., burning fat or improving endurance while running). The Surge calculates heart rate zones for you based on your age and several other factors, but you can also customize these zones if you're familiar with your average heart rate while resting versus exercising. There's also a link to Fitbit's FAQ page on heart rate right inside the app, a feature I found very useful.

The resting heart rate that the Surge tracked seemed accurate and was in keeping with the resting heart rate I've recorded with chest-strap heart rate sensors. I also went running while wearing both the Surge and the Garmin Forerunner 920XT — another multisport GPS watch with a compatible heart rate strap that goes for $490— to see how the heart rate data from each device compared. Although data from the two devices varied a bit during my run, both devices reported a nearly identical average heart rate for the overall workout. However, the Surge's heart rate sensor has a few quirks that serious athletes might want to take into consideration before purchasing the device, according to Ray Maker (the author of the popular exercise blog DC Rainmaker), who noted the watch's tendency to miss dramatic dips in heart rate in his review of the Surge.

As for the Surge's GPS capabilities, I found that the device was able to pick up a GPS signal about as quickly as other GPS watches when I was in a fairly open space (like my suburban neighborhood). But in Midtown Manhattan, the Surge couldn't pick up a signal at all. Then again, neither could the Suunto Ambit3 Sport, which I also wore around Midtown. The Surge performed better in other areas of New York City, where there are fewer tall buildings. Overall, the Surge was just as accurate at tracking my route and total distance traveled as the Suunto Ambit3 Sport and the Garmin Forerunner 920XT, both of which cost more than Surge.

However, the Surge can't track cycling or swimming, making it fairly useless for triathletes or people who like to swim or cycle. Right now you can only use the Surge in GPS mode to track running, hiking, walking and golfing. A recent announcement by the company claims that an upcoming software update due out in April will support outdoor cycling. But even if the Surge does get cycling capabilities, it's still lacking swim functions.

In addition to all its fitness-tracking abilities, the Surge also allows you to view texts and incoming calls from your smartphone on your wrist. This is a convenient feature for those who don't feel like digging around for their phone to read a text, but you can't respond to texts or answer calls from the Surge. The Microsoft Band and the Garmin Forerunner 920XT also send certain notifications from your phone to your wrist, but neither the TomTom Multisport nor the Suunto Ambit3 Sport offer such smartwatch capabilities.

Like most of Fitbit's products, the Surge rewards your fitness efforts by sending you virtual "badges" via emails or smartphone notifications. I got a Redwood badge for climbing 25 floors in one day (I was moving out of my second-floor apartment), and I have to say that it really did motivate me to take the stairs more often.

Some people may also find motivation in Fitbit's social features. You can connect with other Fitbit users via the company's app or Web-based dashboard. You can also search for people you know who also have Fitbit trackers, and challenge your friends or family members to compete in step-count challenges like the "Daily Showdown" or the "Workweek Hustle."

Fitbit Surge
Amazon
$129.86
View
We check over 130 million products every day for the best prices
View All Deals