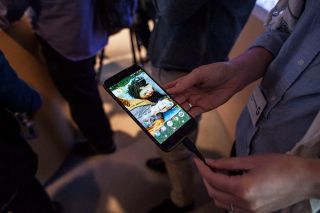 Google debuted its first smartphone this week, dubbed "Pixel," signaling the company's move into an industry long dominated by the likes of Apple and Samsung. And considering Google is already the developer of the Android mobile operating system, what will make the Pixel different from other smartphones already on the market?

Google unveiled the Pixel Oct. 4, saying it will provide the best experience "by bringing hardware and software design together under one roof."

This isn't Google's first foray into the smartphone industry: The company's Android operating system is available on smartphones from a number of companies, including Samsung, HTC and Motorola. Previous smartphone releases from Google were part of the Nexus program, in partnership with other smartphone providers. But Pixel is all Google's — the first smartphone built entirely by the company. [9 Odd Ways Your Tech Devices May Injure You]

"With Pixel, we obsessed over every detail, from the industrial design to the user experience," Brian Rakowski, vice president of product management at Google, wrote in a blog post to introduce the new phone.

Google has highlighted that Pixel users also will have unlimited photo and video cloud storage, which may quell some smartphone users' fears of reaching their storage capacity.

Pixel also has what Google is touting as the "best smartphone camera ever." The 12.3-megapixel rear camera received top marks from DxOMark, which measures camera image quality through rigorous testing. With an overall score of 89, the Pixel's camera surpassed every other smartphone camera currently on the market, reported Tom's Guide.

"Pixel puts cutting-edge computational photography in an ultra-fast and easy-to-use camera," Rakowski wrote in the blog post. "Our team of photography gurus and image-processing experts have spent the last year designing and tirelessly optimizing our entire camera stack. Pixel's camera lets you take stunning photos in low light, bright light or any light."

Another feature touted by Google is the Pixel's battery and charge time. According to the company, 15 minutes of charge will yield 7 hours of use. Pixel is also the first phone with the company's virtual "smart" service, known as Google Assistant, built in, allowing users to have "a natural conversation with Google" to search or complete tasks.

Pixel phones will start at $649 (equivalent to the price of the new iPhone 7) for the smaller versions and $769 for the "XL" model. The phone comes in three colors: "really blue," "very silver" and "quite black." In addition to being available for preorder from Google directly, Pixel can be bought at all Verizon retail outlets, including Best Buy stores.

At the Google event earlier this week, the search-engine company also announced the launch of a new virtual reality headset and a home assistant to rival Amazon's Alexa.