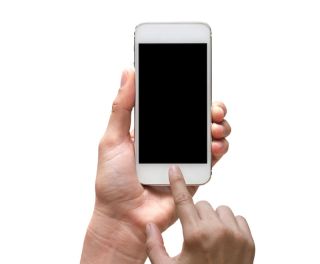 A transparent material that can be attached to a smartphone's touch screen could help the device generate electricity whenever anyone taps it, researchers in China say.

Touch screens are now found on most cell phones and tablet computers. Using a touch screen typically involves finger taps, and scientists at Lanzhou University in China reasoned that the mechanical energy from these motions could be converted into electricity to charge the phone's batteries, which could significantly extend the working time of these portable devices.

The researchers developed a new material based on a transparent silicone rubber known as PDMS. Scientists embedded wires in this rubber that were made of lead zirconate titanate that were only 700 nanometers, or billionths of a meter, wide. For perspective, this is about 140 times thinner than the average width of a human hair. [Top 10 Inventions That Changed the World]

As the rubber solidified, the researchers used electrical fields to align the nanowires in the rubber in columns. This alignment helped set both the material's electrical and visual properties.

Whenever such nanowires are bent — for instance, whenever anyone taps on the material — they generate electricity, a phenomenon known as piezoelectricity. By making sure the nanowires are lined up with one another, the researchers helped ensure that they would react to finger taps in unison, generating as much energy from the motions as possible.

When the material is viewed head-on, these incredibly narrow wires are largely invisible, and the material can look mostly transparent. As such, the nanowires "can harvest tapping energy on a screen without influencing the screen's normal working," study senior author Yong Qin, a materials scientist at Lanzhou University, told Live Science.

In addition, when the material is viewed from an angle, the nanowires interfere with light rays, which means that anything seen through the material at that angle will look blurry. As such, the material can also help protect a user's privacy by preventing anyone nearby from being able to peek at someone else's smartphone screen.

In experiments, tapping on the material generated an electrical current of 0.8 nanoamperes, or about one-millionth of the electricity used by a hearing aid. The scientists noted that the results of future research could help their material generate more current to efficiently recharge the batteries of mobile devices.

The scientists detailed their findings online Jan. 13 in the journal Small.