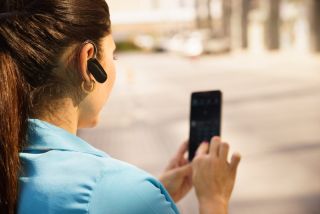 Apple's new iPhone 7 will not have a headphone jack, and so people who want to avoid holding their phones up to their ears must now rely on Bluetooth ear buds.

That has raised a question for those who are wary of radiation: Is Bluetooth safe?

It turns out that there is no evidence that Bluetooth does any harm. In addition, there are no plausible physics mechanisms by which Bluetooth could cause damage to a person's cells, said John Moulder, a professor emeritus and radiation biologist at Medical College of Wisconsin in Milwaukee.

"The power is just too low to damage anything biological by any mechanism we know of," Moulder told Live Science. "If it's going to damage you, it has to be via a mechanism that no one has ever conceived of. [What Is Electromagnetic Radiation?]

Bluetooth, named after Danish King Harald Bluetooth, who united all of Scandinavia in the 900s, is a protocol that uses electromagnetic waves for short-range communication between devices. Though it was developed in the 1990s, it has recently become ubiquitous in many of the "smart devices" used in the Internet of Things.

"It's sort of like Wi-Fi, except a tenth to a hundredth of the power," Moulder said.

Worries about whether the electromagnetic radiation associated with modern gadgets may cause illness are not new. The internet is rife with concerns about the effects of cellphone radiation and Wi-Fi, and even the World Health Organization acknowledges that some people may have a condition called EMF hypersensitivity. Those with this condition experience physical symptoms such as headaches and nausea that they believe are caused by electromagnetic fields. Some have even gone so far as to move to remote areas of West Virginia that are free from radio waves.

But no evidence suggests this hypersensitivity is actually caused by EMF, Moulder said. Although these Wi-Fi refugees do have symptoms, the people who have claimed to have the condition cannot distinguish between real and sham electromagnetic fields, for instance.

As for cellphone radiation, in a recent U.S. National Toxicology Report study in rats and mice, high levels of exposure to cellphone radiation were linked to an increased risk of a few types of tumors, such as a benign nervous system tumor known as a schwannoma, as well as malignant brain tumors known as gliomas. However, the number of cancers found in rats exposed to cellphone radiation may have been within the range expected to occur by chance, rather than a statistically significant difference, Moulder previously told Live Science.

And large epidemiological studies, which have cumulatively asked millions of people about their health and mobile phone use, have found no clear association between cancer and cellphone use.

The safety concerns are even lower for Bluetooth than for Wi-FI, Moulder said. In traditional Bluetooth devices pairings — for instance, a smartwatch worn on the wrist that is occasionally communicating with a computer — the power of the electromagnetic radiation is so low and the communication so sporadic that it's extremely unlikely that it could cause any harm, Moulder said.

But the iPhone unveiled at Apple's event on Wednesday (Sept. 7) takes Bluetooth use into another realm. Ear buds, like those that will be used with the new iPhone, are worn close to the head and send out signals more frequently than traditional Bluetooth devices do, so they will likely expose people to more radiation than, say, a smart thermometer or a Fitbit fitness tracker, Moulder said. However, there's still no plausible biological mechanism by which it could cause harm, he added. [Creative Genius: The World's Greatest Minds]

Few studies have looked specifically at Bluetooth safety, because the physical mechanisms behind Bluetooth are essentially the same as those behind Wi-Fi, and because, until recently, people were not widely exposed to this type of radiation, Moulder said. However, the few studies looking at the technology have found that it is safe. For instance, a 2014 study in The Laryngoscope journal found that, unlike cellphone radiation, Bluetooth radiation was not associated with any reduction in auditory nerve function in humans.

There are dangers, of course, associated with cellphones that don't involve any radiation at all. For instance, studies have shown that talking on hands-free Bluetooth earphones is less safe for drivers than not talking on a phone at all, likely because the driver gets distracted by conversation with a distant partner, Moulder said. Also, people who wear headphones and blast their music — whether those headphones use Bluetooth or not — can damage their hearing, Moulder said. And frequent texting can lead to thumb problems and carpal tunnel syndrome, he said.