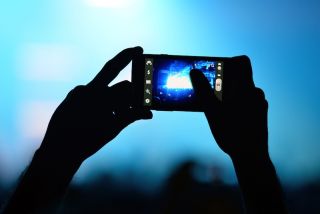 When Apple unveiled its new iPhone 7 last week, Senior Vice President of Hardware Engineering Phil Schiller called the device's camera one of the most advanced ever put in a smartphone. Cameras in phones are so commonplace now that users take them for granted, but improving the picture-taking capabilities of the newest devices means cramming a lot of tech into a small, and thin, package.

Upgrading the cameras in smartphones typically requires improving the sensors that pick up the image, the optics that focus it and, perhaps most importantly, the software and computing power in the phone, said Daniel Sakols, vice president of business development at Amalence Inc., which makes the imaging technology for companies such as phone maker Huawei.

"There was a big increase in the available processing power to take this image information and do radically new things with it," Sakols told Live Science. [Photo Future: 7 High-Tech Ways to Share Images]

One of the first cellphones with a camera was the Nokia 7650, released in 2002. At the time, Nokia said the technology was going to usher in the "multimedia messaging era," according to a statement from November 2001. The camera, at 0.3 megapixels, was a far cry from current models, which range from 8 megapixels to 12 megapixels.

The pictures taken on the Nokia 7650 were 30 kilobytes and were saved on only 3.6 megabytes of RAM, according to a 2003 review by ZDNet. This means that few existing smartphone apps would fit on the Nokia phone, let alone image-stabilization software.

In comparison, the Samsung Galaxy Note 7, which launched last month, has a processor similar to that found in a laptop computer and has 853,000 times as much data-storage space as the Nokia 7650. The Note 7's camera has a sensor that picks up 12 megapixels, while the iPhone 6 has an 8-megapixel camera and a similarly powerful processor. Both Samsung's and Apple's phone cameras can run image-stabilizing programs, as well as apps that sharpen edges and adjust for lighting conditions, a whole suite of adjustments that the cameras make without the user even knowing.

Sakols said that improvements to phone cameras made taking pictures more convenient and allowed the phone to compete with point-and-shoot cameras, if not digital SLRs. "It's what phone manufacturers are building around," he said. "It's no longer about just having a bigger sensor."

Software isn't the only factor in improving the cameras in smartphones. For example, the earliest phone cameras lacked the ability to focus. Now, smartphones can alter the position of the lens slightly using tiny motors and can provide a wider variety of depths of field and better autofocus capabilities. In fact, a big selling point of the iPhone 7 is the optical zoom, which actually changes the arrangement of lenses. The iPhone 6 had only a digital zoom, which just enlarges the image with software; it doesn't add any detail. [9 Odd Ways Your Tech Device May Injure You]

The optics of focusing are becoming a big issue in camera design, Sakols said. As a result, some manufacturers are adding a "bubble" to the front of the camera to add focal length to the lens(the bubble is visible on an iPhone 6 if you look carefully). Samsung has had camera models with optical zoom in the past, notably the Galaxy K, but the addition of real lenses added bulk to the camera itself. (On Samsung's website the phone even looks a little like a point-and-shoot camera)

"When you look at the lens against a sensor of a given size, one of the interesting constraints [is] as the sensor size increases so does the lens in front of it to project a nondistorted image," he said. This is why manufacturers are adding bubble shapes to the lenses — to get a little bit of extra distance between the lens and sensor so that the lens itself can be a bit larger.

But there are limits, Sakols said. He added that most phone makers now try to limit the size of the image sensor in order to keep the lens size down.

This is one reason why even though pictures taken on smartphones are good, digital SLRs still have an edge in some areas. This can be partly explained by the physics of gathering light onto an image. The aperture of the lens limits the resolution of a magnified image because when light waves go through a smaller opening, they tend to diverge rather than hitting the sensor in parallel. This process is called diffraction. Magnifying an image only magnifies the loss of detail, so the big lenses that professional photographers use will outperform a smartphone camera's zoom in some areas.

However, software and hardware advances have leveled the playing field for smartphone cameras and narrowed the performance gaps among phone manufacturers. Apple was once far and away superior, but that's less true now than it was nearly a decade ago, Saklos said.

"Apple's imaging capability is pretty awesome," he said. "But it's not just the iPhone 6 that can produce these beautiful images. Other smartphone cameras can kick out a fab image as well."