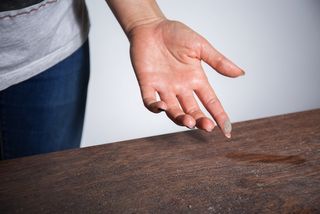 A little dust may seem harmless, but scientists have identified a number of potentially hazardous chemicals in the dust found in households, according to a new review study.

The researchers analyzed information from 26 previous studies that included data on dust samples collected from homes in 14 U.S. states. Results revealed 45 chemicals in dust that were originally from consumer or household products, such as vinyl flooring, furniture, cleaning products, perfumes, and even pizza boxes and popcorn bags.

What's more, 10 of these chemicals were present in 90 percent of the dust samples collected, which suggests that many people are exposed to these substances, the researchers said.

The 45 chemicals belong to five classes of compounds: phthalates, flame retardants, phenols, fragrances and highly fluorinated chemicals. Many of these chemicals have been linked to health hazards in previous studies, such as hormone disruption, fertility problems and cancer, the researchers said.  [12 Worst Hormone-Disrupting Chemicals & Their Health Effects]

Children are likely at higher risk for exposure to chemicals from dust, because children often crawl or play on the floor and put their hands in their mouths, the researchers said.

"The findings suggest that people, and especially children, are exposed on a daily basis to multiple chemicals in dust that are linked to serious health problems," study co-author Ami Zota, an assistant professor of environmental and occupational health at George Washington University's Milken Institute School of Public Health in Washington D.C., said in a statement.

The chemicals found at the highest levels in dust were phthalates, followed by phenols, flame retardants, fragrances and highly fluorinated chemicals.

But it's important to note that the researchers could not determine the health effects of any of these chemicals at the levels they are found in dust, they said.

"These categories of chemicals are certainly of concern," said Dr. Kenneth Spaeth, chief of Occupational and Environmental Medicine at Northwell Health in Great Neck, New York, who was not involved in the study. However, the new research shows only that the chemicals are present in dust, and future studies are now needed to examine the extent to which these chemicals get in the body and contribute to harmful effects on health, Spaeth said.

It's very difficult for consumers to avoid these chemicals, because many are found in common items, and manufacturers are often not required to include the substances on the label. "I would say it would be extraordinarily hard to eliminate them" from the home, Spaeth said.

But there are still ways for people to reduce their exposure to chemicals in dust. These methods include washing their hands frequently, using a vacuum with a HEPA (high-efficiency particulate arrestance) filter and, when possible, opening windows to allow fresh air to circulate in the home, Spaeth said.

The study is published today (Sept. 14) in the journal Environmental Science & Technology.