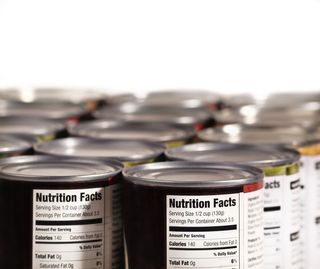 Canned foods may contain BPA because the chemical leaches from the liner into the food.
(Image: © Canned food photo via Shutterstock)

The chemicals bisphenol A and phthalates are linked to obesity and insulin resistance in adolescents in two new studies, but the findings cannot yet answer whether the hotly debated hormone-like compounds are causing the negative health effects they are linked with, experts say.

In one study, the researchers measured the levels of DEHP, a phthalate found in processed foods, in the urine of 766 adolescents ages 12 to 19. They found that teens with higher amounts of DEHP in their urine had increased rates of insulin resistance, a condition that can lead to Type 2 diabetes.

"In laboratory studies, phthalates influence the expression of genes related to how we respond to sugar ingestion with insulin secretion," said study researcher Dr. Leonardo Trasande, professor of environmental medicine and pediatrics at New York University. "A previous study has identified an association between phthalates and insulin resistance in adult males," so in the new study the researchers examined this relationship in adolescents, Trasande said. [9 Weird Ways Kids Can Get Hurt]

However, the study does not prove a cause-and-effect relationship. It is possible that insulin-resistant teens tended to eat food with higher phthalates content, or that they excreted more DEHP in their urine compared to healthy children, the researchers said in their study, which was published today (Aug. 19) in the journal Pediatrics.

Evidence for BPA and obesity link

Another study published in the same journal examined the relationship between bisphenol A (BPA) and obesity in more than 10,000 children ages 6 to18. Children with the highest amounts of BPA in their urine had double the risk of being obese, compared with children with the lowest urinary BPA levels.

In this study too, the researchers recommended cautious interpretation of the results. BPA is found in higher concentrations in fat tissue compared to other body tissues, so it is possible that people with more body fat store more BPA from food, and excrete more in urine, said study researcher Dr. Joyce Lee, professor of pediatrics and endocrinology at University of Michigan.

Another possibility is that people who are obese are merely eating more BPA-containing food, Lee said. [5 Ways to Limit BPA in Your Life]

Still far from a consensus Both BPA and phthalates have been the focus of intense research in recent years because of concerns raised over their potential to act like hormones in people who are expose to them through food packaging, but studies have been inconclusive and scientists have not reached a consensus.

In a commentary published along with the new studies, Dr. Robert Brent, professor of pediatrics at Thomas Jefferson University and an expert on environmental toxicology, questioned the methods commonly used in studying exposure to such chemicals, particularly BPA. He said that chemical content of the urine may not be a good measure of a person's actual exposure to the chemical.

Humans metabolize BPA rapidly and eliminate it via the urine, keeping only low amounts of the chemical in the blood, which is where it can have biological effects, Brent said.

Previous studies have tested people who ate foods with high BPA content, and saw that even though they excreted higher amounts of BPA through their urine, their blood levels of BPA were still at the lowest detectable amounts, Brent wrote in the commentary.

Moreover, research has suggested that metabolism destroys the ability of BPA to disrupt the endocrine (hormone) system. "After it gets into the blood, it doesn't even have the ability to attach to an endocrine receptor," Brent told LiveScience. "Yet, it's shown to be linked with a whole host of diseases. Autism, diabetes, genital malformation, cancer, you name it."

The U.S. Food and Drug Administration has maintained that toxicity tests show current levels of adults' exposure to BPA is low and safe. However, in July 2012, the agency announced a ban on using BPA in baby bottles and cups after the chemical industry requested the ban, and as the industry was phasing out BPA use. BPA is more highly regulated in several countries, including Canada, as precautionary measures, but officials also generally acknowledge the lack of evidence about BPA's effects.