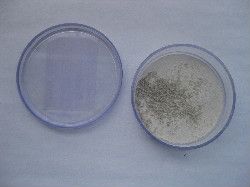 Dust like this contains an oil from dead skin that helps clean the air of ozone.
(Image: © Charles Weschler )

The dead cells that slough off your skin every day pile up in the dust that collects around your home. But this grimy-sounding stuff actually helps clean the air indoors, according to new research.

Oil associated with dead skin cells removes the pollutant ozone, a molecule made up of three oxygen atoms. In fact the oil, squalene, reduces indoor ozone levels by about 2 to 15 percent. Its molecules contain six double bonds between carbon atoms, and these bonds interact with — and break apart —ozone.

Best known for its protective effect high in the atmosphere, where it shields the Earth from harmful radiation, ozone is harmful when closer to the Earth's surface. It is formed by reactions between pollutants emitted by cars, industry and other sources. Breathing ozone can reduce lung function and inflame the linings of the lungs. Repeated exposure may permanently scar lung tissue, according to the U.S. Environmental Protection Agency.

So, the roughly 500 million skin cells you shed every day are being put to good use.

Chemist Charles Weschler and colleagues collected dust from non-floor surfaces in 500 bedrooms and 151 day care centers in Denmark and analyzed it for squalene and cholesterol, another oil associated with skin. Their analysis indicated that cholesterol from skin made a less significant contribution to the removal of ozone than squalene. (The study was part of a larger Danish study examining the impact of the indoor environment on children’s health.)

Other chemicals that contain double bonds between atoms, like oleic acid found in certain cooking oils, and some surfaces, like those made of rubber or neoprene, also consume ozone, according to Weschler. Even the squalene on living human skin contributes to ozone reduction.

Previous research within a simulated aircraft cabin indicated reactions with passengers' exposed skin, hair and clothing were responsible for half of the ozone removal that occurred. And another study, this time in a simulated office, found that one person removes 10 to 25 percent of the ozone in a typical 1,059 cubic foot (30 cubic meter) room.

"Basically, human beings are large ozone sinks. We have only found this out within the last five years!" Weschler wrote in an email to LiveScience. "In an occupied room humans consume more ozone than dust [does]. However, dust continues to react with ozone even when the room is not occupied."

But this doesn't mean you should stop dusting, Weschler wrote.

"The skin flakes shed by one person may trigger an allergic response in another person or may serve to pass along microbes that could cause an adverse effect," he wrote. "While it is a good thing that dust consumes ozone, we should continue to clean — to remove dust. Human occupants will continue to 'recharge' squalene in dust and on the surfaces that they contact."

Their work was published recently in the journal Environmental Science & Technology.