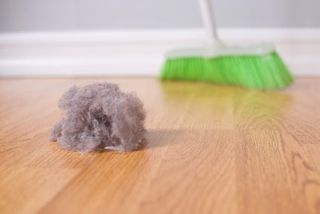 A new computer model that simulates how dust comes into and out of homes found that most indoor dust originates outside. The model may help communities figure out how to best clean up contaminated waste sites.
(Image: © Stockxpert.)

No matter how much you clean, dust always comes back, and you might have wondered how it all gets there. Now, researchers have created a new computer model to explain what happens.

Most dust originates outdoors and comes in through the air, rather than trampled in on people's shoes, at least in a group of homes in the Midwestern United States, they found.

Beyond answering a household curiosity, the model could help communities figure out how to best clean up contaminated waste sites, which release particles that can end up in dust.

Indoor dust is a hodgepodge of icky stuff, including dead skin cells, soil, tiny airborne particles and even toxic substances, such as lead and arsenic, that can come from contaminated waste sites.

To figure out how such contaminants hitch a ride on dust particles into your home, researchers at the University of Arizona transformed the everyday life of dust accumulation into a set of mathematical equations to make a computer model.

While other researchers have studied dust basics, many such studies have solely focused on small airborne particles that can get deep in your lungs. The Arizona team looked at larger particles as well, which can still get airborne, but are more likely to stick to hands and could be ingested by children.

The model included factors that control how much dust lives in your home. For example, the amount of soil trampled inside depends on how many people live in a household, and how much time they spend outside. Also, walking indoors can kick up dust from floors and carpets and spread it to new areas of the home. And cleaning activities, such as vacuuming and dusting, can remove it.

Next, they tested and validated their model using data collected by the U.S. Environmental Protection Agency from houses in the Midwest.

The model may be useful for communities dealing with a hazardous waste site cleanup.

"It's pretty difficult to figure out how much you need to clean the soil to protect people in their homes," said study researcher Paloma Beamer, an assistant professor at the University of Arizona's College of Public Health. "So this model will help in identifying what are the appropriate levels to clean the soil to."

Also, if the model finds, as it did for the Midwest residences, that most contaminants are coming in through the air, it would indicate that a cleanup crew might be better off figuring out ways to prevent the soil from becoming airborne, rather than trying to remove the soil from the site, which is likely to stir up more dust, Beamer said.

The study was published in the Nov. 1 issue of the journal Environmental Science & Technology.